Please ensure Javascript is enabled for purposes of website accessibility
Log In Help Join The Motley Fool
Free Article Join Over 1 Million Premium Members And Get More In-Depth Stock Guidance and Research
By Adam Galas - Sep 1, 2015 at 8:05AM

Learn three ways Carbo Ceramics is navigating the carnage of the oil crash and whether or not it will be enough to save the company.

Crude prices have crashed to their lowest levels in six and a half years, which has meant a terrible year for high-priced proppant maker Carbo Ceramics (NYSE: CRR).

As oil producers have massively scaled back spending, the amount of U.S. oil rigs has collapsed by almost 60% from an October 2014 high, greatly reducing demand for Carbo's products. 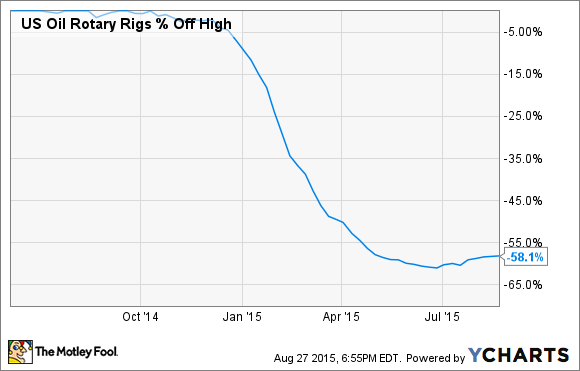 With Carbo shares now down 84% since their mid-2014 high, investors might be wondering whether now is a good time to snap up undervalued shares, or if the stock is a value trap that may end up going broke before crude prices recover.

To help answer that question, let's look at three things Carbo Ceramics is doing to not just survive the oil crash, but also to hopefully prepare the company for strong growth in the years to come.

Cutting costs to the bone
Carbo's main efforts to insure its survival during the commodity crash have been focused on preserving cash. For example, it's been idling some of its facilities to reduce production and inventories in order to slash costs. In its last quarter, these efforts allowed the company to reduce its selling, general, and administrative expenses 22% year over year.

In addition, the company made the painful but necessary decision to slash its dividend by 70% in the first quarter of 2015, saving the company $21.4 million in annual dividend costs. While that may not sound like a lot, given that the company's operating cash flow over the past year only totaled $108 million, it's actually quite significant.

Continued focus on superior product differentiation
Carbo's business model is based on providing high-tech and higher-cost ceramic proppants that use proprietary patented technology that, theoretically, allow it to achieve higher margins in a commoditized industry. Proppants are substances used to prop open cracks in fracked shale, improving oil flow.

For example, the company has been focusing its efforts recently on expanding production capacity of Kryptosphere, its premium ceramic proppant, which provides superior oil conductivity in extremely high-pressure environments, such as very deep wells or offshore drilling. It's also pushing its ScaleGuard product, which minimizes buildup in pipes that can greatly decrease oil and gas flow.

Such efforts are important, because in recent years ceramic proppants have been losing market share to lower-cost frac sand, forcing Carbo to increasingly rely on its Northern White frac sand for an increasing share of its business.

This growth in frac-sand market share has been hurting Carbo's margins, even before the oil crash made higher-cost ceramics less appealing to oil producers desperate to slash expenditures. 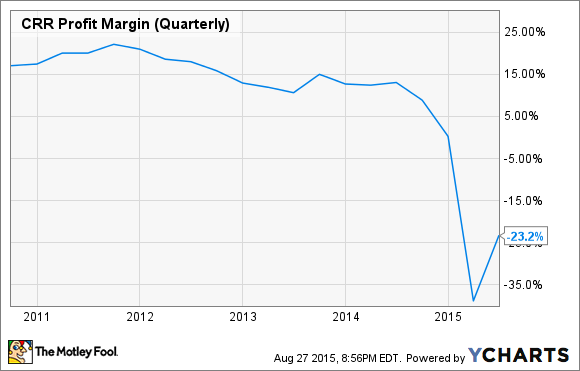 Renegotiated credit facility
To help insure adequate access to liquidity on July 27, Carbo agreed to amend its credit revolver under the following terms:

Even though these new terms limit Carbo's ability to invest in its business over the next 18 months, it also eliminates previous debt covenant leverage requirements that Carbo may not be able to meet if oil prices remain low for a long time.  Carbo has seen its cash and other liquid assets evaporate quickly over the past several quarters. Thus, the much less strenuous debt covenants might be the difference between surviving and bankruptcy, should oil prices remain low for several years.

Takeaway: Management is making all the right moves, but the stock remains risky
Despite a strong effort to preserve cash in the face of this latest commodity crash, Carbo Ceramics, in my opinion, remains one of the riskier proppant stocks you can buy. The company is operating at a loss, and its business model remains focused on higher-spec, more expensive products that were losing market share even before the oil crash began.

Whether the company survives may depend on how long oil prices remain depressed, something no one can predict with any certainty.