The mobile game company got crushed on weak guidance last month. Here's why.

What: Shares of Glu Mobile (GLUU) fell 21.7% in August, according to S&P Capital IQ data, driven by the company's weaker-than-expected quarterly earnings and forward guidance. After climbing nearly 80% earlier this year, shares of the free-to-play games specialist are now up just 17% so far in 2015 -- albeit compared to the S&P 500's modest decline over the same period: 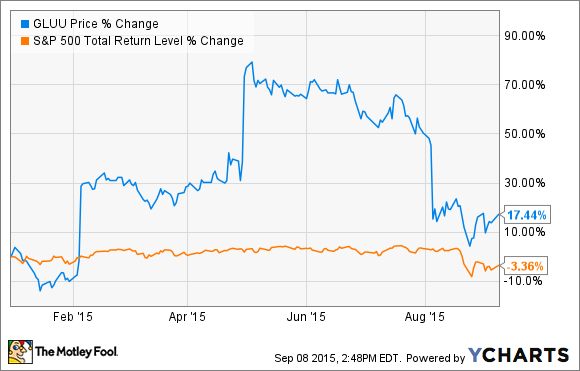 So what: Glu Mobile enjoyed a strong start to the year, with better-than-expected quarterly results released in both February and April. Most notably in the latter, Glu Mobile revealed an intriguing partnership through which China-based mobile gaming giant Tencent acquired a significant stake in the company. And in addition to its core Kim Kardashian: Hollywood title, Glu Mobile has since secured key likeness rights allowing it to create themed celebrity games featuring other big names like Britney Spears, Jason Statham, and Nicki Minaj.

Statham and Minaj notably signed up in Glu Mobile's most recent quarter, when adjusted revenue grew 64% year over year to $57.5 million, while adjusted earnings before interest, taxes, depreciation and amortization came in at $1.7 million, compared to a loss of $0.9 million in the same year-ago period. Glu Mobile was quick to point out both figures "significantly" exceeded the company's guidance, which called for adjusted revenue between $50 million and $52 million, and adjusted EBITDA to be a loss of $3 million to $5 million. Glu Mobile also turned in adjusted net income of $0.1 per share, compared to analysts' expectations for a loss of $0.04 per share.

Shares fell hard, however, when Glu Mobile told investors to expect current-quarter revenue of $58 million to $60 million, with a net loss of $0.02 per share to break even. By contrast, Wall Street was modeling adjusted net income of $0.08 per share and significantly higher revenue of $74 million.

In addition -- and despite its outperformance -- Glu Mobile narrowed the top and bottom ends of its 2015 guidance range for revenue, maintaining the midpoint of the previous range in the process. Now, Glu Mobile anticipates 2015 revenue of $267 million to $282 million, with adjusted net income per share between $0.15 and $0.19.

Now what: During the subsequent conference call, Glu Mobile CEO Niccolo de Masi blamed the light outlook on a combination of "increased organic investment" given the success of its licensed IP titles, as well as launch delays for several game titles. Even so, de Masi reminded investors when those titles do arrive, this should mean a strong fiscal 2016 is in store for Glu Mobile.

In the end, it's hard to fault Glu Mobile for these temporary delays, especially considering its current licensed IP titles have performed so well. But this also underscores a serious challenge in the free-to-play games industry -- namely, that companies in the space must continually pump out new titles and updates to ensure the "freemium" gaming crowd doesn't quickly tire of their wares. For perspective, Kim Kardashian: Hollywood and Racing Rivals are together expected to account for 35% of Glu Mobile's revenue next quarter. Though that's an improvement over the 52% of total sales collected from last year's top two titles, the lack of diversification is too much for my investing tastes. For now, that's why I still personally can't bring myself to endorse Glu Mobile as a viable long-term investment in gaming.

Steve Symington has no position in any stocks mentioned, and neither does The Motley Fool. We Fools may not all hold the same opinions, but we all believe that considering a diverse range of insights makes us better investors. The Motley Fool has a disclosure policy.