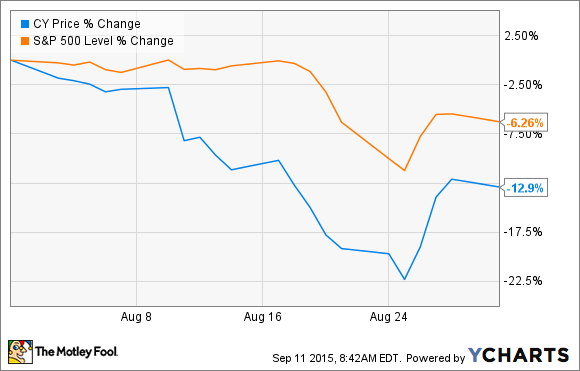 What: Shares of Cypress Semiconductor (NASDAQ:CY) fell 12.9% in August, according to data from S&P Capital IQ. On Aug. 10, the company completed the sale of its TrueTouch touchscreen controller operations to Taiwanese peer Parade Technologies, along with announcing lowered guidance for the third quarter.

So what: In Cypress' original guidance for the current quarter, revenue targets stood at roughly $505 million and adjusted earnings were outlined near $0.17 per share. In the post-TrueTouch world, third-quarter sales are now seen landing at $480 million while earnings guidance stayed within a rounding error of the earlier forecast.

Investors should have expected lower sales as a significant amount of orders moved to Taiwan, but the update also accounted for soft order flows from Chinese customers. All in all, this reminder acted as a bucket of cold water over Cypress share prices.

Now what: More recently, Mizuho Securities analyst Vijay Rakesh reiterated his "buy" rating on Cypress shares with a $21 price target, which would represent a more than doubling of share prices. Rakesh likes the way Cypress is refocusing on attractive growth markets such as automotive and industrial computing, which should drive both revenues and margins higher from here.

This week, Sterne Agee CRT analyst Doug Freedman started Cypress coverage with another "buy" rating and a $15 price target. Freedman likes how the TrueTouch sale removed a weight on Cypress' gross margins, and loves the economies of scale and automotive opportunities that came with the Spansion merger.

If these analysts are playing in the right ballpark -- and I should note that Freedman is one of the sharpest semiconductor analysts out there, in my book -- the guidance-related drop in August looks like a serious overreaction. We're actually looking at an increasingly healthy business here, enjoying a shot of adrenaline from the well-timed Spansion buyout and headed into all the right markets. The Internet of Things will provide tailwinds for years to come, especially as that booming market intersects with increasingly smart and responsive car designs.

Cypress shares have traded largely sideways for several years, except for a short-lived pop based on the Spansion buyout. Once the merger's integration costs are shaken out of the system, Cypress should deliver very healthy earnings and stock returns over the next few years. I expect the full third-quarter report in October to reverse August's speculative price plunge.