Please ensure Javascript is enabled for purposes of website accessibility
Log In Help Join The Motley Fool
Free Article Join Over 1 Million Premium Members And Get More In-Depth Stock Guidance and Research
By John-Erik Koslosky - Sep 13, 2015 at 8:00AM

A billion daily users is a nice number to boast about, but Facebook has a bigger challenge.

Facebook (FB 1.83%) reached a noteworthy benchmark Aug. 24 when more than 1 billion people used the site in a single day for the first time. The figure is impressive, no doubt, but it's not as significant as it might seem at first blush.

At this stage in Facebook's story, the 1 billion-user day was largely an inevitability. But perhaps more important, it represents a statistic that is becoming a less important measure of the site's success as it moves forward.

While it's nice to boast of 10-figure user numbers, Facebook's bigger challenge at this stage is engaging those users -- keeping them on its site and mobile apps, posting, reading, watching, and interacting. We'll take a look at how Facebook is faring on that front and what it's doing, but first, let's take a step back and look closer at user numbers in light of the big billion-user day.

Despite the social network's vast reach, Facebook's daily active users, or DAUs, continue to climb. To say the sheer numbers are impressive would be an understatement. Have a look: 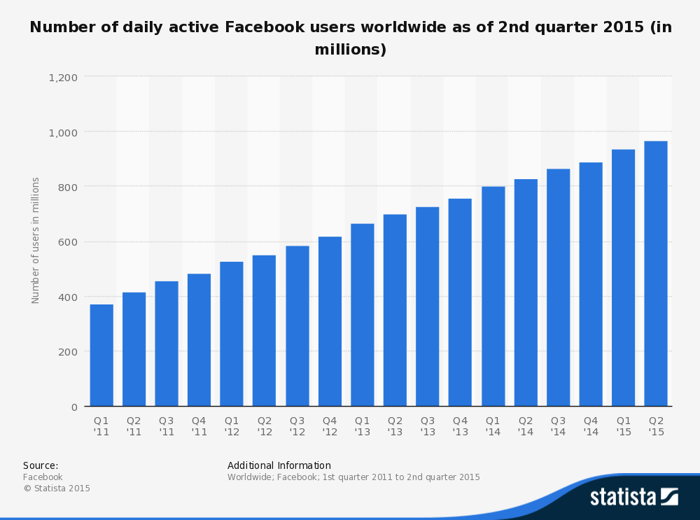 Perhaps more impressive is the fact that daily user growth continues to climb at a double-digit percentage rate. But the rate of DAU growth has been on the decline since 2011.

We shouldn't expect that trend to reverse. But that's just the natural progression for a company that built out such a huge user base in such a short time. Growth has to slow as it climbs closer to saturating Facebook's user market.

Where Facebook can continue growing even as DAU growth slows is in getting users to spend more time on its properties. The average user now spends 46 minutes a day on Facebook properties, not including time spent messaging on WhatsApp, which Facebook has yet to monetize, CEO Mark Zuckerberg told analysts in July. That was up 15% from last July's 40 minutes.

Facebook's site and apps also account for one of every five minutes that smartphone users spend on their phones, the company says. Considering the sheer number of apps vying for a user's time, it's remarkable that one company would own one-fifth of the overall time.

Holding your attention
Facebook has been doing a number of things to increase that time spent. News Feed has been at the center of many improvements, since that's where a lot of our interaction takes place on the site and mobile app. Here's a little of what Zuckerberg had to say in the last earnings call:

So, News Feed at the core is proving to be just a great experience for users. It's getting better. ... As people spend more time with News Feed, we get better about understanding what they like and getting the content that they care about in front of them. So we're investing on that front.

Just roll with it
Video is a significant area of expansion. The company has been making it easier for users to share video in News Feed, and Zuckerberg says there was a 40% uptick in videos shared since the start of the year. What's more, it's essentially handicapping videos shared directly to Facebook, often called "native video." Those benefit from the app's auto-play technology as users scroll through News Feed -- meaning that users don't have to follow a link out of News Feed to YouTube or another site. They stay put on the Facebook page, or in a Facebook app.

How important is that? In one quarter with auto-play, Facebook saw a 58% increase in engagement with its videos.

We see a somewhat similar concept with Instant Articles, the company's effort to draw in news organizations. Facebook offers a 70% share of its advertising revenue on the page. That may sound like a bad deal for Facebook at first blush, because it sold the ads, but it keeps users on Facebook, not following links to the news outlets' websites or apps.

There's more than one way to grow
All this matters because keeping people engaged keeps people inside Facebook's network, interacting, supplying information for better ad targeting, and seeing many more of those better-targeted ads. While it may not be able to add new users at a blistering pace, Facebook can still drive significant ad growth through increased engagement.