Please ensure Javascript is enabled for purposes of website accessibility
Log In Help Join The Motley Fool
Free Article Join Over 1 Million Premium Members And Get More In-Depth Stock Guidance and Research
By Bradley Seth McNew - Sep 16, 2015 at 7:16AM

Shares are down 40% in the past six months -- this might be a great entry point.

Whole Foods Market (WFM) was the first successful model of a company selling organic and natural foods at scale, and for that the stock surged in its early years, for being such an innovative company with relatively little competition. But things have changed for Whole Foods, with new competitive pressure from companies such as Kroger, Wal-Mart, and others now selling organic and natural foods for lower costs.

Whole Foods' outlook has lost much of its luster because of this new, more competitive landscape, and the stock has dropped more than 40% in the past six months because of it. But now that the stock has fallen so far, is it worth looking at again as a potential value play? Here is why it might be.

Whole Foods' spoiled outlook
Over the past 15 years, Whole Foods' same-store sales have increased 8% on average. However, same-store-sales growth of just 1.3% in the most recent quarter was the company's lowest level in years.

There are multiple reasons same-store-sales growth is slowing, but the one troubling investors most seems to be increased competition. Whole Foods has been the undisputed leader in its market for much of its history, with only relatively small-scale natural-food grocers posing any threat to Whole Foods' growth. However, big name mass-market grocers such as Kroger and Wal-Mart, with their ability to reduce prices, have aggressively joined this space, and customers now have the option to pay less for similar products. With this spoiled growth outlook, the market has lowered its confidence in Whole Foods and shares have plummeted. 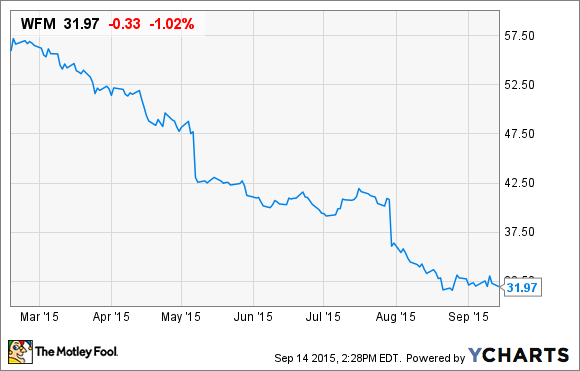 WFM stock price over the last 6 months. Chart by YCharts

Where there may still be growth ahead
To fully understand Whole Foods' strength, it's important to consider that its stores are maturing. You can't just continue cramming more and more people into one small location to drive perpetually higher same-store-sales growth. Whole Foods' revenue per square foot is already far higher than that of the average grocer competitor, coming in at $990 per square foot during the most recent quarter. For context, the industry average was $156 in 2014, according to the Food Marketing Institute's research. Additionally, gross margins remain far higher than those of its competitors. Even if competition has put pressure on gross margins as well, Whole Foods still maintains a gross margin around 35%, compared with around 22% for Kroger.

The company plans to eventually open more than 1,200 stores, leaving significant room to expand from the 424 open as of July 2015. There is no designated time frame for completing those new stores, but currently Whole Foods is opening about 40 per year and might start opening them even faster in coming years, with the new "365 by Whole Foods" concept stores that looks to be more streamlined.

Is it time to buy Whole Foods?
I wrote an article earlier this year about why it might be a bad idea to bet on Whole Foods' long-term growth strategy, with its stock already trading at a premium and competition heating up. My analysis then was that at its $50 share price, which placed it at 31 times trailing 12 month earnings, it would need to grow substantially more than expected or be able to maintain that high P/E indefinitely to make it a worthwhile investment.

However, now the stock is down to around $32 a share and its P/E is a much cheaper 19. With same-store-sales growth still strong at new stores, 800 new stores over the next 10 to 20 years could mean a lot of long-term growth left for this stock. Competition is still certainly a concern, but at this low price, it might finally be time to bet on Whole Foods.