And if it does, will this spell doomsday for defense contractors?

The U.S. Navy's stealthy new Zumwalt-class destroyer is as big as a battlecruiser, and twice as lethal. Image source: U.S. Navy.

The United States Navy has a massive new stealth destroyer. Two of them, in fact -- but now it looks like they might never get a third.

Seeking a stealthy, survivable destroyer to lead it into the 21st century, and one with the range to threaten targets both on land as well as at sea, the U.S. Navy began developing the DDG 1000 destroyer class back in 1994. By 2001, the Navy had settled upon a plan to build 32 such vessels, a plan that was later scaled back to first seven, then just three.

Prime contractor General Dynamics (GD -1.22%) has the first two DDG 1000s already (mostly) completed. The USS Zumwalt (DDG 1000) is due to reach initial operating capability in 2016, and the USS Michael Monsoor (DDG 1001) should be delivered for sea trials that same year. The third ship of what's come to be called the Zumwalt class, USS Lyndon B. Johnson (DDG 1002), is already 41% complete and due for delivery in 2018. But as BloombergBusiness reports, the Pentagon will review plans to finish its construction later this month -- with an eye toward not finishing the ship.

Military money troubles
Boasting missiles, guns, and potentially even a new 100-mile-range railgun, the Zumwalt class of destroyers poses a triple threat to targets at sea, in the air, and on land. But today, it sits defenseless in the crosshairs of Pentagon budget-cutters.

Defense Department estimates, you see, put the cost of the third Zumwalt at $3.5 billion. That's roughly twice the cost of a DDG-51 Arleigh Burke-class destroyer, but significantly cheaper than the first two Zumwalts cost to build. Even so, the U.S. Navy is facing a bit of a budget crunch right now as it tries to stretch its dwindling defense dollars to cover:

And by the way, Zumwalt was at one time supposed to be the ship that replaces the Ticonderogas. So, put another way, because the Navy wants to spend $268 billion on other warships, it may try to save (less than) $3.5 billion on a ship it's nearly half-done building already.

Of course, when you put it that way, the Navy's plan doesn't seem to make much sense.

But what if it happens anyway?
Presented with a Pentagon plan to kill the third Zumwalt back in 2008, Congress rejected the idea. At least three defense contractors will be hoping (and presumably lobbying) for a repeat result this year. But what if they're all disappointed?

Gauging the impact of DDG 1002's cancellation on the defense contractors is hard to quantify precisely. General Dynamics, though, has the most to lose.

As lead contractor on this project, General Dynamics built the hulls for both of the first two Zumwalts while subcontracting work on the vessels' deckhouses to fellow shipbuilder Huntington Ingalls (HII 0.17%). On the third Zumwalt, General Dynamics would be keeping the deckhouse in house, building it itself and consequently keeping an even greater proportion of the funds allocated to building the warship. Logically, if we assume that General Dynamics has been paid or is due payment on 41% of the $3.5 billion third Zumwalt, that leaves roughly $2.1 billion still at risk -- less than 7% of the company's annual revenues, according to S&P Capital IQ.

Huntington Ingalls, no longer on the hook to build the deckhouse for this warship, will accordingly lose little if the contract is canceled. A third contractor, Raytheon (RTN), is responsible for putting in much of the vessel's electronics after the hull is built and the deckhouse is in place. Raytheon would likely lose the few tens of millions of dollars it had expected to bill for that work if the ship gets canceled.

Long story short, then, cancellation of the contract to build DDG 1002 would do the most damage to profits at General Dynamics and Raytheon. But it's still only one ship. The damage should be survivable for both. 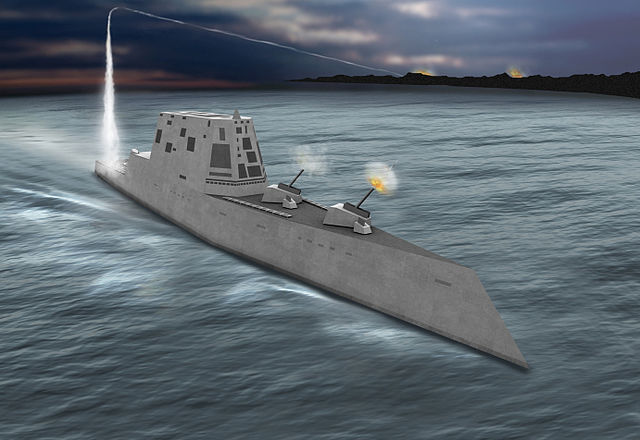 America's new Zumwalts will be armed with missiles, guns, and possibly even new 21st century-railguns -- if they get built at all. Images source: U.S. Navy.

Rich Smith owns shares of Raytheon. You can find him on our public stock-picking service, Motley Fool CAPS, where he publicly pontificates under the handle TMFDitty -- and where he's currently ranked No. 261 out of more than 75,000 rated members.