Please ensure Javascript is enabled for purposes of website accessibility
Log In Help Join The Motley Fool
Free Article Join Over 1 Million Premium Members And Get More In-Depth Stock Guidance and Research
By George Budwell - Sep 21, 2015 at 11:00AM

Dyax Corp.'s stock has been on fire in 2015. Despite its recent run-up, one Motley Fool thinks that this speculative growth stock remains a compelling buy. Here's why.

The biopharmaceutical company Dyax Corp. (NASDAQ: DYAX) has had one heck of a strong year by any measure. So far this year, its stock has been crushing the iShares Nasdaq Biotech Index (NASDAQ: IBB), as well as the broader markets: 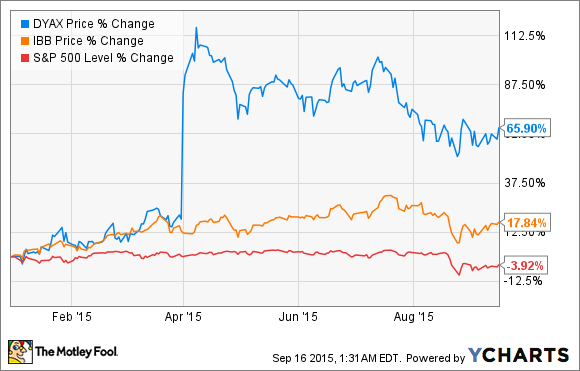 Truth be told, though, most of the appreciation in Dyax's share price occurred in a single day back in April. Specifically, Dyax's share price immediately rose by an astounding 50% following the company's announcement that its experimental treatment for hereditary angioedema, or HAE, attacks, known as "DX-2930", significantly reduced the rate of HAE events at both the 300 mg and 400 mg doses in a small early stage study.

Since then, Dyax has used this upswing in its share price to raise approximately $200 million to help fund the drug's forthcoming pivotal clinical trial, expected to be launched later this year, according to management.

What this brief recap shows is that the market has clearly built a huge premium into Dyax's present share price based solely on the prospects of this single late-stage clinical candidate.

Given that no experimental drug is 100% guaranteed to reach the commercialization stage, investors therefore need to consider if the stock's risks outweigh the potential rewards. With this in mind, let's take a deeper look at DX-2930.

DX-2930's risks vs. rewards
According to analysts polled by S&P Capital IQ, DX-2930 is projected to see sales of around $600 million by 2019, if approved. As an approval for a prophylactic treatment for HAE such as DX-2930 would presumably erode the sales of Dyax's Kalbitor that is designed to treat acute HAE attacks, I think it's reasonable to assume that the market is presently valuing this company at around 5 to 6 times its 2019 estimated sales.

Now, I admit that sounds expensive. But it's still considerably less than the premiums being garnered by other rare disease specialists such as BioMarin and Isis Pharmaceuticals. According to S&P Capital IQ, for instance, Isis and BioMarin are presently trading at around 9 to 10 times their projected 2019 sales, respectively.

What's important to keep in mind is that the market loves orphan drugs like DX-2930 because their sales are typically sustainable over long periods of time for a variety of reasons that make them nearly immune to generic competition, as well as pushback from payers over pricing. This is also the same reason why these drugmakers command some of the highest premiums in the industry when it comes to buyouts.

Comparatively speaking, the market therefore appears to be discounting Dyax's market cap in a fairly substantial manner. Having said that, I also think this discount is probably warranted given the uncertainty surrounding DX-2930's future development, and the fact that Dyax has a much smaller margin for error compared to either a BioMarin or an Isis--both of whom sport far more diverse clinical pipelines than Dyax.

Is Dyax worth the risk?
Summing up, I think Dyax still has a decent amount of upside potential remaining based on the commercial prospects for its experimental HAE treatment DX-2930. But what really makes this stock interesting, to me, from a risk to reward perspective, is that Kalbitor's sales, along with the company's revenue from its Licensing and Funded Research Portfolio, have been growing nicely in recent quarters. If this trend continues, and there's no reason to believe it won't, these growing revenue streams should ultimately limit the stock's downside risk. Put simply, Dyax's long-term rewards appear, in my opinion, to outweigh its risks, making it an emerging biopharma stock that's probably worth a deeper dive by risk-tolerant investors.