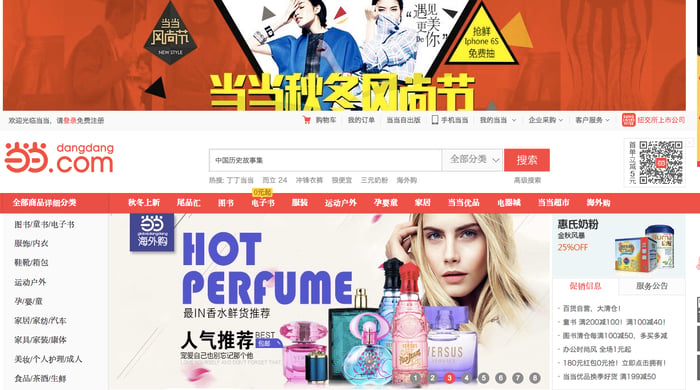 When I was first introduced to Dangdang (NYSE:DANG) four years ago, it was pitched as "The Amazon of China." The comparison was helpful in that it helped me get a better perspective of what Dangdang was, and what it hoped to be.

However, to say with certainty that the two companies will share a similar fate is ridiculously optimistic. Unlike Amazon, which was the first mover in the e-commerce scene and now the undisputed leader in all things e-commerce in the U.S., Dangdang faces entrenched competition with deep pockets like JD.com (NASDAQ:JD) and Alibaba's(NYSE:BABA) Tmall.

But that kind of competition, and the risks surrounding the company, is exactly what I'm looking for. Find out why I'll be purchasing more shares of Dangdang below, and how this fits into my overall investing plan.

For more than five years, my family has had a pile of cash sitting in savings accounts. This cash is there as an emergency fund and to build out a down payment on a house should my wife and I ever consider buying. The problem, however, is that the money has been sitting there, earning absolutely nothing for five years.

After reading about risk expert Nassim Taleb's approach to investing, my wife and I decided to change how we treat our cash holdings. Moving forward, we're leaving 85% of this account in cash but taking the other 15% and spreading it out evenly in 10 different high-risk, high-reward stocks.

The thinking on this is rather simple: We'd be disappointed, but just fine financially, if we lost all of our money on stocks. Our downside would be limited to 15%. Our upside, however, could be unlimited if we're willing to hold these investments for the long-run (or until they are needed).

Dangdang is a good high-risk, high-return bet
As with Amazon, Dangdang started out as a bookseller and has continuously moved toward hawking merchandise via the Internet. The company hopes to differentiate itself from JD.com and Tmall by focusing squarely on mid to high-end customers. Over time, this has meant more focus on merchandise over media. As you can see, the company has done an excellent job increasing sales in this division during the last 18 months. 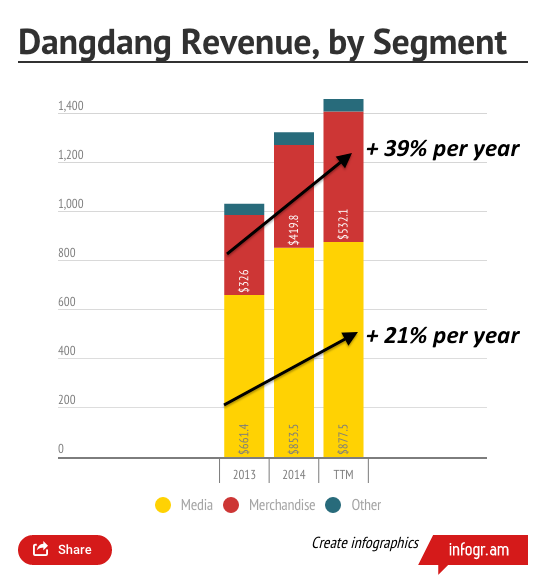 But accelerating sales in merchandise alone isn't why I'm placing a bigger bet on Dangdang. There are several other characteristics the company has that are a "must" for my high-risk investments.

First and foremost, the company is run by its founders. The husband and wife team of Guoqing Li and Peggy Yu Yu currently serve as CEO and Chairwoman, respectively. They founded Dangdang back in 1999 and have been at the helm ever since. Together, they own just shy of 40% of outstanding Dangdang shares -- meaning that they have significant skin in the game.

Further, the company has shown that it could embrace multiple futures. As I already mentioned, what started primarily as a book-selling company has expanded vastly. And even though Dangdang has invested heavily in the past three years in building out its fulfillment centers -- the very thing that gives Amazon such a distinct advantage in the U.S. -- Dangdang has no long-term debt and more than $250 million of cash in the bank. That means that it could continue to explore ancillary services as they arise without putting the company in a fragile financial state.

Putting it all together
I have no illusions of Dangdang overtaking JD.com or Tmall in terms of mass-market appeal in China. Instead, I see a company run by its founders, who are trying to corner a very specific market: high-end Chinese consumers.

While the market for China's growing middle class is far more lucrative, Dangdang is happy to leave much of that to the bigger players. To that end, the company's focus on mobile transactions is crucial -- as this is how many high-end customers prefer to do their shopping. In the third quarter of 2013, only 10% of orders were placed on mobile devices. In just two year's time, more than 40% of all orders are now placed on mobile.

Currently, shares of the company are trading for just under three times sales. For comparison's sake, JD.com sells for about the same amount, while Alibaba sells for more than 12 times sales.

While there's some uncertainty about the future of Dangdang's shares being available stateside -- Yu Yu and Li made a go-private offer in July, presumably to list shares on the Chinese index -- any buyout would still represent a premium to today's price. I think there's enough upside potential to justify making a small bet on the company.