That's good news for the Blue Oval. Ford has lost a great deal of money in Europe over the last few years. New-vehicle sales in Europe are rising from lows not seen in decades as regional economies start to improve after years of recessions.

Ford has been working hard to turn around its European operation. Last month's sales numbers suggest that its efforts are -- finally -- starting to pay off.

Mulally's blueprint for fixing Europe is starting to take hold

The blueprint for Ford's ongoing effort to return its European operation to profitability was laid out by former CEO Alan Mulally way back in 2012.

As Mulally explained it at the time, Ford's approach would have three components. One was restructuring: The company cut costs by closing three factories and shuffling its manufacturing to make better use of its remaining plants. Ford also announced a series of actions to bolster its brand, including revamps of its dealerships and other steps to boost transaction prices and resale values.

But the big one was what Mulally and other executives called "product acceleration." Ford had traditionally offered a very limited range of models in Europe. Some sold well -- the Fiesta and Focus have been among Europe's best-selling cars for years -- but Ford didn't have entries in other segments (midsize SUVs, for example) where it could have gained additional sales.

It has spent the last few years changing that, drawing on the "One Ford" approach that drove its turnaround in North America. Ford has launched a slew of new products in Europe over the last few years -- at relatively low cost, since many were drawn from the company's global portfolio.

New models from Ford's global portfolio are boosting sales
Here's a key example. For years, Ford has sold a midsize sedan called the Mondeo in Europe. And for years, the Mondeo was a Europe-only model that shared no engineering with Fords here in North America. That has changed: Ford's all-new Mondeo, released at the end of last year, bears a striking resemblance to Ford's Fusion.

The Ford Mondeo is all-new to Europe, but it's not new to Americans: It's the Ford Fusion with a few tweaks and additions, including a station wagon model. Source: Ford Motor Company.

That resemblance is no coincidence: It's the same car, adapted to Europe's regulations. It's built in Spain, and it's called the Mondeo, but it's a lot like the Fusions that Ford builds in Flat Rock, Michigan.

The Fusion and Mondeo used to be two separate cars, developed by two separate teams of engineers and designers. But the benefits of making them versions of the same car are immense: Ford was able to spend more money developing the Fusion/Mondeo, which made it a better car -- and Ford is able to make more money per car because of the much-improved economies of scale.

How's it doing? Sales of the Mondeo in August were more than double Ford's sales of the old model a year ago.

Sharing products around the world to boost sales and lower costs
Ford has been using that same approach with other models for several years now. The Fiesta and Focus are sold in markets all around the world with only minor changes, as are many of Ford's commercial vehicles like the Transit line of vans. And Ford has drawn on its U.S. portfolio to bring products like the Edge SUV to Europe (and to China, too).

European customers can even buy Mustangs now -- five-liter V8s and all. Mustangs are only built in the United States, but Ford has begun building them for export to Europe, China, and other markets. 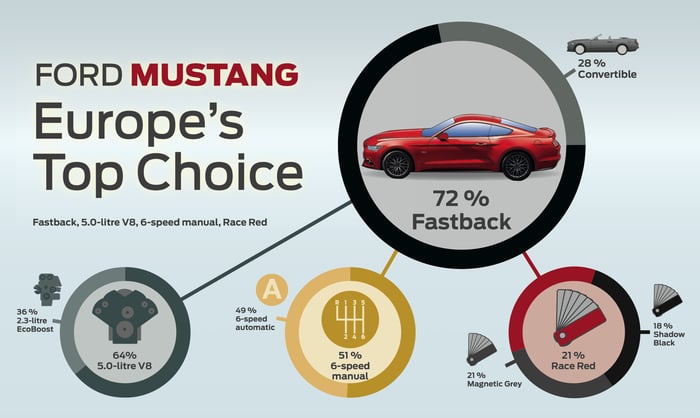 Ford released this graphic showing how demand for the Mustang is shaping up in Europe. Source: Ford Motor Company.

Ford Europe chief Jim Farley said last week that European demand for the Mustang has been "far beyond" Ford's expectations, and the European version of the car is currently back-ordered until spring.

The upshot: Profits in Europe may finally be in sight
Ford is still saying that it doesn't expect to turn a full-year profit in Europe until next year. But the signs of progress are becoming hard to miss -- and an end to years of big losses in the region will give Ford's bottom line a substantial boost.