If you've ever invested in a business that uses one of several different types of legal structures, such as partnership, "C" corporation, or LLC, or if you're the beneficiary of a trust or an estate, then you've probably received a Schedule K-1 in the mail during tax season. MLPs and LLCs are often able to pass more income on to investors because they don't pay corporate income taxes, but that comes at the cost of more complexity and potential tax implications.

Let's take a closer look at the Schedule K-1 form, the implications for you, and what you must do with it. The pros and cons of trusts, partnerships, and S corps

MLPs and LLCs can be a great income investments, since these organizational structures don't pay income tax but pass that burden along to investors. The same goes for some trust structures.

In other words, because these entities don't pay corporate taxes, the distributions paid to investors may be treated differently than dividends paid by corporations. A typical corporation's regular dividend is taxed as long-term capital gains, while much of the income paid and shown on a Schedule K-1 can be classified as regular income. That means it's taxed at your effective income-tax rate, which is often much higher than the 15% or 20% long-term capital gains rate for regular dividends.

In summary, a Schedule K-1 issuing entity may be able to pass more income along to you, the investor, but you may end up giving more of it back in taxes than if you'd received regular dividends from a corporation. It really boils down to your tax rate, and how much more income the LLC, MLP, or trust is able to pay. 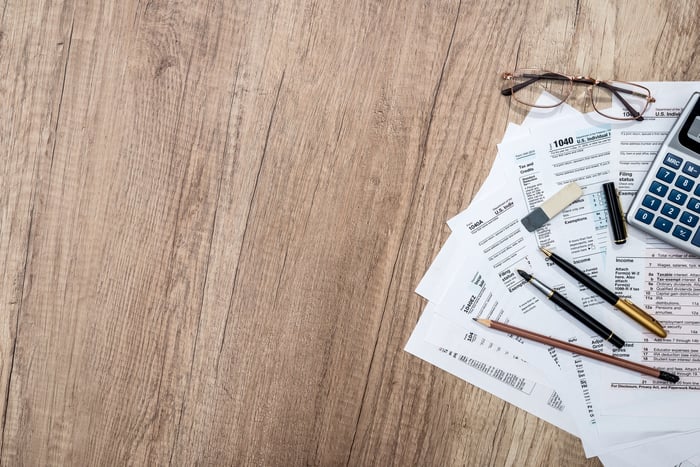 Different Schedule K-1 forms, and what they're for

There are three Schedule K-1 forms.

The Form 1041 is for beneficiaries of an estate or trust: Form 1065 is for partners in a master limited partnership, or LLC: These Schedule K-1 forms are a lot like a 1099 or W2: You'll receive one from the trust, estate, LLC, S corp., or partnership, and it breaks down the income you received into various categories. This is where the tax complexity comes in, because some categories of income may be taxed as capital gains, while others are taxed as regular income, and you want to be sure you pay the appropriate tax rate. After all, while you don't want to pay the higher regular income rate if you can pay the lower capital gains rate, you also don't want to get on the IRS' bad side by under-reporting income.

A Schedule K-1 is not entirely like a 1099 or W2, though. If you're getting a Schedule K-1 form from an entity you partly own, you may also be able to claim a share of the losses, deductions, and credits, as well as your share of the income.

What you need to do with a Schedule K-1

Just like any other income or tax document you get during tax season, you need to report your schedule K-1 when you file your taxes -- for two reasons:

It's wise to either go to a tax professional or at least use reputable tax-filing software if you're receiving Schedule K-1 forms. Not only will this simplify the process, but it will likely save you more than enough time to make the cost worthwhile, especially if you have multiple Schedule K-1 forms.

Additionally, it's worth noting that even if you receive a Schedule K-1 for an investment in an IRA or 401(k), don't ignore it! You may still be required to pay tax on distributions received inside a retirement account from an MLP, LLC, or S-Corp because of something called "unrelated business taxable income," or UBTI. For this reason, it's generally best to avoid these kinds of investments in a retirement account.

It's about the big picture

If you get a Schedule K-1 because of a windfall such as an inheritance from an estate or as beneficiary of a trust, it's just the way it is. But if you're receiving them due to investments in LLCs, partnerships, or a "C" corp, you should look at the bigger picture.

Those entities are often able to pay out more of their cash flows because of their legal structures, but you'll probably pay more tax on your end. In some cases, you'll also get a share of the losses, deductions, and credits, as well. In other words, there are numerous potential benefits to these kinds of structures.

There are trade-offs, too. You'll have more complex -- and potentially more costly -- tax preparation each year. If you're only getting a small amount of income because of a minimal investment in a few shares of an MLP or LLC, it may not be worth it.

But if it's a major source of income, such as being co-owner of a business, then it's a different situation entirely. Whether the income you get from these investments is worth the cost and headache is something you'll have to determine based on your situation.