What: Clothing retailer Men's Wearhouse (NYSE:TLRD) saw its stock sink 25% during the month of September, according to S&P Capital IQ data. The drop has pushed shares into the red for 2015 despite their having surged higher by 50% from January until late June. 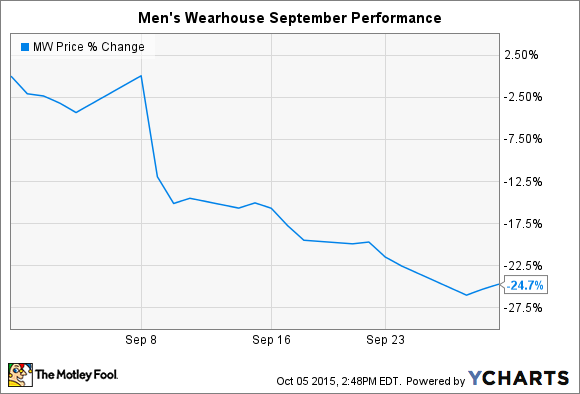 So what: Last month's stock dip happened as investors digested the company's second-quarter earnings release that was announced on Sept. 8. Men's Wearhouse said in that report that comparable-store sales for its namesake brand rose a solid 4.4% as earnings almost tripled to $2.92 per share. However, the Jos. A. Bank business, which Men's Warehouse purchased last year for almost $2 billion, isn't faring nearly as well.

Jos. A. Bank comps sunk lower by 9.4%, worsening the 1.5% drop the metric suffered in the first quarter of the year. That sorry performance has convinced Men's Wearhouse executives that the brand is in need of dramatic changes to its sales approach, its marketing, and its product offerings. "We are focused on rebuilding the Jos. A. Bank profit model," CEO Doug Ewert said in a press release. The turnaround strategy will include a wide range of tweaks, including "changing the promotional messages to be clear and compelling without unusual quantity requirements, like buy one get three free offers," he said.

Now what: Because of the scope of adjustments involved in management's Jos. A. Bank shift, executives warned shareholders to expect sharp sales swings ahead. Demand may fall hard as the company works to move the brand off of the heavy promotion schedule that has driven sales in the past. But the hope is that profits will remain on track, even as revenue slips. In fact, Men's Wearhouse affirmed its full-year earnings forecast of $2.80 per share.

But Wall Street decided to look past that optimistic profit target and instead focus on the risks around Men's Wearhouse's turnaround plan. Last quarter's 9% sales shortfall is evidence of serious trouble in a major part of the business, and there's no guarantee that executives have the right plan in place to get Jos. A. Bank back to posting solid sales growth in the next year.