What: It was another tough day to be a biotech investor as the entire sector was once again sold-off hard today. The iShares Nasdaq Biotechnology ETF (NASDAQ:IBB), an exchange traded fund that holds a basket of 144 biotech stocks with market caps over $200 million, was down as much as 6.5% at one point today before recovering slightly in afternoon trading.

Many individual stocks were hit even harder than the ETF, as shares of Alnylam Pharmaceuticals (NASDAQ: ALNY), BioMarin Pharmaceutical (NASDAQ: BMRN), bluebird bio (NASDAQ: BLUE) and more were all down at least 10% at some point today despite the fact that not a single one these companies released any news to justify the decline.

So what: Biotech stocks have been under pressure for several months now, as since hitting their peak as a group over the summer they have now shed nearly a quarter of their market value. 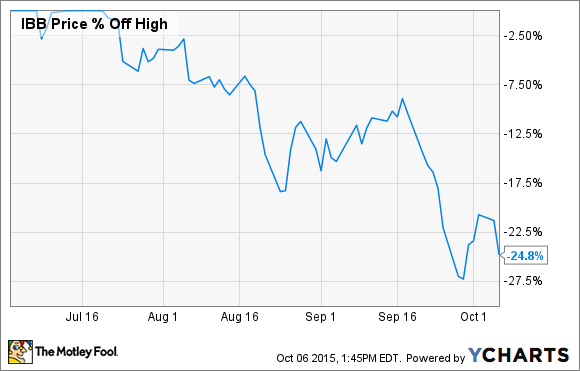 While the decline started in July things really started to get ugly for the sector on September 21st when presidential candidate Hillary Clinton expressed her outrage on twitter about a New York Times article that referenced a huge price jump in a decades-old specialty drug. Since that tweet went out the sell-off in the entire biotech appears to have accelerated, leaving us where we stand today.

Now what: Biotech stocks in general tend to be a bit riskier than average, so investors in the space need to be aware that widespread sell-offs can occur at anytime and for any reason. Thats nothing new.

However, when you zoom out and look over the last 5 years you will see that the biotech sector has been on fire, blowing past the returns of the S&P 500, so perhaps it should not be such a surprise to see a pullback in the sector. 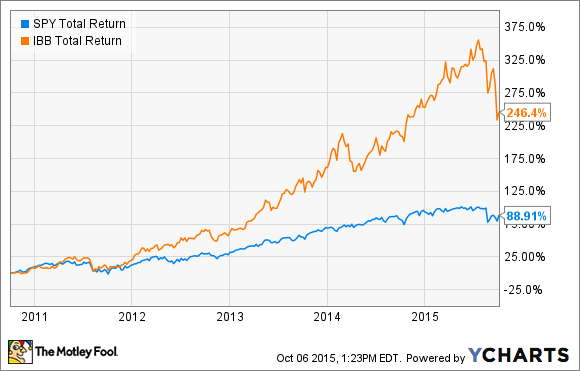 While the healthcare landscape in general will likely always be under fire from politicians on both sides of the aisle for the foreseeable future, companies that discover novel therapies that treat or even cure diseases with unmet medical needs will likely make fine investments over the long-term, regardless of the political rhetoric of the day. Investors would be wise to focus their efforts on finding good companies with strong product portfolios and should simply ignore short term price swings.

Consider these sell-offs to merely be part of the price of admission that comes with investing in the space.