Biotech has had an absolutely terrible time over the last few months, with most of the top dogs in the industry seeing their share prices get some pretty ugly haircuts: 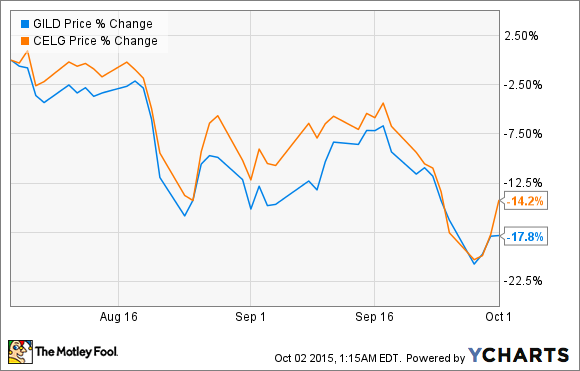 The odd and perhaps ridiculous part of biotech's dramatic downturn is that it has nothing to do with the industry's fundamentals. In fact, many bellwether companies such as Celgene (NASDAQ:CELG) and Gilead Sciences (NASDAQ:GILD) have raised their annual guidance during the year, despite the negative impacts of a strong dollar on foreign exchange.

Assuming that this biotech bloodbath isn't being triggered by the looming assimilation of mankind by the Borg, the only other reasonable explanation is that this sell-off is due to the growing fear that drug prices could soon be slashed in the U.S.

After all, nearly every major presidential candidate, on both the left and ring, has at least mentioned that drug prices are seemingly out of control. And the top Democrats in the race, Bernie Sanders and Hillary Clinton, have even given voters a broad outline on how they would go about lowering drug prices, if elected.

This debate over drug prices really came into focus, though, following the news that Turing Pharmaceuticals' CEO Martin Shkreli raised the price of the anti-parasite medicine, Daraprim, from $13.50 to a mind-boggling $750 per pill, quite literally overnight.

So, the market now appears convinced that the political will finally exists to implement the changes required to allow the federal government to directly negotiate drug prices with their manufacturers under Medicare Part D -- a major reason why U.S. drug prices are higher, on average, than in most other Western countries.

However, I personally believe that it will take an actual invasion by the Borg to change this long-standing law that has been in place since the Medicare Modernization Act of 2003. Here's why.

Money often trumps political will
The funny thing about campaign promises is that they have a way of withering once the election is over. And then powerful lobbying machines, such as the Pharmaceutical Research and Manufacturers of America (PhRMA), can work its magic to inform government policy.

So, it's not surprising that PhRMA, the drug industry's biggest lobbying group representing 48 companies, is already advocating to keep the government out of the business of either setting or negotiating drug prices under Medicare Part D. In fact, PhRMA has dedicated multiple pages on its website to the "success" of Medicare Part D and has even started publishing opinion pieces in high-profile media outlets trumpeting the status quo.

And a look back at PhRMA's past political initiatives on this issue shows why they'll probably succeed yet again at keeping the government from tinkering with drug prices under Medicare Part D.

In 2009, President Obama was considering pursuing a law, as part of the Affordable Care Act, that would allow the government to negotiate for lower prescription-drug prices under Medicare Part D, or even sanction the importing of cheaper drugs from Canada or Europe. After numerous visits by PhRMA's chief lobbyist Billy Tauzin at the time, however, the president dropped this pursuit altogether without much fanfare, leaving the 2003 law intact. The group's substantial lobbying efforts have also reportedly led to the death of several bills over the years that would have changed this law.

An unfortunate reality
Although several leading economists have cogently argued that this 2003 law costs the U.S. government tens of billions every year, the stark reality is that Congress is beholden to powerful lobbying groups such as PhRMA, meaning that there is almost no chance that U.S. drug prices are about to come crashing down anytime soon.

As such, I believe the market is acting completely irrationally in regard to biotech and biopharma stock prices right now. Put plainly, drug prices in the U.S. are under about as much threat as the Earth is from a Borg attack.

Considering how we can take advantage of this irrational fear, I think investors shouldn't look a gift horse in the mouth and start buying top-notch companies like Celgene and Gilead Sciences. These two biotechs have a long history of double-digit earnings growth, possess great clinical pipelines, and have perhaps the best management teams in the industry. And a deeper dive into their fundamentals will show, in my opinion, that they are ridiculously cheap after this unwarranted nosedive. So, when the fear wears off and rational minds eventually prevail, we should see these two large cap stocks rebound nicely.