Ford (NYSE:F) kicked off its huge "Friends and Neighbors Pricing Event" this past week. This isn't the usual cash-back promotion: Ford dealers are offering most vehicles at discounted no-haggle prices until January 4.

Most of the prices are pretty good deals, within about $200 of dealer invoice. They can be combined with other incentives that Ford is already offering, like low-interest financing for buyers who qualify.

Ford is also giving dealers a bit more money on each vehicle they sell, according to Automotive News. For dealers and customers, it seems like a win-win -- and it could give Ford's U.S. sales quite a boost to close out the year.

But if buyers and dealers are both winning, doesn't that mean Ford is losing? What's going on here?

Is Ford using its fat profits to buy a sales boost?
Ford's North America unit made $2.7 billion before taxes in the third quarter, with a fat 11.3% operating profit margin. And it said its average transaction price in October was $34,600, up $1,800 from a year ago.

Is Ford now burning some of that profit margin in an effort to grab market share?

Ford insists it isn't. The company's U.S. sales chief, Mark LaNeve, said this past week that while the promotion is intended to give buyers a "simple, compelling offer," it won't increase Ford's overall incentive spending.

As LaNeve describes it, the program was conceived as a way to cut through the end-of-the-year advertising noise with something that would get buyers' attention. It doesn't really give buyers more of a discount than the average buyer was already getting, he said.

That makes some sense. Lots of car-shoppers dread the whole price-negotiation process. Even if the end price isn't any different on average, many customers will find value in the idea that they don't have to negotiate: The discount is already in place. The promotion should draw more buyers to Ford's showrooms, and it might well give the Blue Oval a solid year-end sales boost without making a big dent in Ford's profit margins.

But even if this doesn't dent Ford's fourth-quarter earnings to any significant degree, it's still something that should raise investors' eyebrows, and not just auto investors'.

Why investors -- and not just Ford investors -- should take note of this
Here's the thing. Total U.S. sales of "light vehicles" (cars, pickups, and SUVs) are up 5.8% this year through October. They've been rising since the end of the last recession. But lately, there are reasons to think they might be peaking. This new Ford promotion could be one.

One widely watched measure in the auto industry is the SAAR, or Seasonally Adjusted Annualized Rate. The SAAR is a measure of the pace of auto sales: It estimates how many vehicles would be sold in the U.S. in a full year at that pace.

The SAAR for U.S. light-vehicle sales in October was 18.06 million. That's a huge number, one not seen in many years. 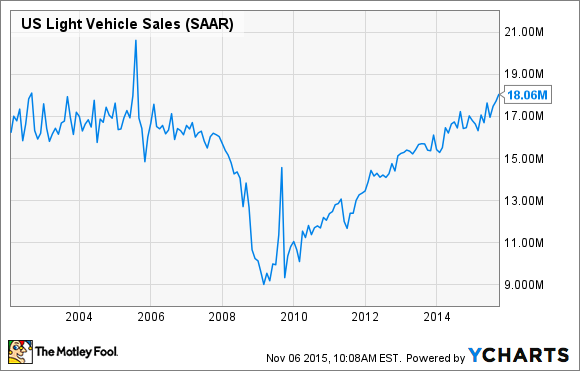 In fact, October's sales pace was the fastest seen since that big spike back in July of 2005. That 2005 spike happened after a General Motors (NYSE:GM) promotion offering "Employee Discounts for Everyone" sent GM's sales soaring and touched off a brief price war between the Detroit automakers.

That's the kind of thing that happens when auto sales are peaking: Automakers resort to discounts and special promotions in an effort to generate some year-over-year sales growth.

The U.S. auto sales pace is a "leading economic indicator," meaning it can help us see economic trends early on. A high level of auto sales is good news -- but only up to the point where growth stalls and automakers feel the need to break out profit-margin-busting discount programs.

That's why Ford's big new discount program is something investors should watch.

The canary in the coal mine hasn't died yet, but...
To reiterate, Ford says its new promotion won't increase its spending on incentives. If true, that means it shouldn't squeeze Ford's profit margins significantly. And so far, GM and other key Ford rivals aren't stepping up with big promotions of their own in response.

But step back a bit and think of it as the proverbial canary in the coal mine. (If the canary stopped singing and died, that warned the miners that toxic gases were contaminating the air in the mine.)

The auto-sales canary hasn't died quite yet. But it got kind of quiet. We'll be keeping a close eye on it.