Amgen (NASDAQ:AMGN) and AstraZeneca PLC (NASDAQ:AZN) are two top dogs among dividend-paying healthcare stocks. Even so, both companies have dramatically under-performed in 2015, relative to the broader pharmaceutical industry: 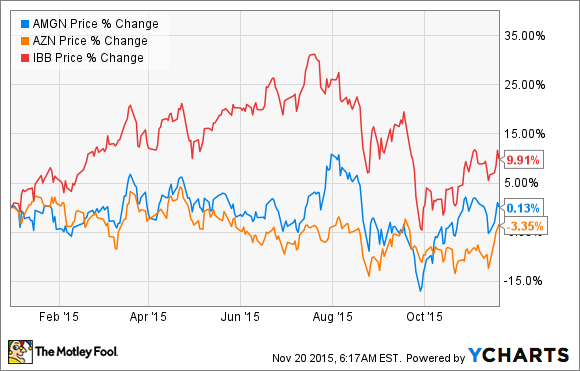 The market appears to be deeply concerned about the impact of generics on each of these drugmaker's top-lines moving forward. Amgen, for instance, is facing the threat of biosimilar competition to its white-blood cell boosting therapies Neupogen and Neulasta, and its rheumatoid arthritis drug Enbrel, all from Novartis subsidiary Sandoz.

AstraZeneca has been seeing its top line erode over the last few quarters due to the introduction of generics of its top-selling heartburn medication Nexium, and this trend is expected to continue in 2016 due to forthcoming loss of patent protection in the U.S. for the cholesterol-lowering medicine Crestor.

The managerial teams of Amgen and AstraZeneca haven't exactly stood idly by while their core product portfolios have come under attack from competitors, however. Each company has invested heavily in R&D to help steady their top-lines during this turbulent period. With this in mind, let's consider which dividend stock offers investors the brighter future heading into 2016.

To do so, let's start by looking at some data compiled from S&P Capital IQ.

At first glance, these numbers clearly tip the scales in favor of Amgen. Although AstraZeneca offers a slightly higher dividend right now, its sky-high payout ratio is problematic to say the least. Furthermore, the plunge in AstraZeneca's bottom and top lines, stemming mainly from the loss of Crestor, means that this situation is only going to get worse in 2016. There's a growing possibility that it will have to slash its dividend in the near term.

Before investors jump the gun and dump AstraZeneca, though, I think they would be wise to wait until the initial sales figures for the company's newly approved T790M-positive lung cancer treatment, Tagrisso, start to roll in. After all, according to industry experts, this targeted treatment is expected to generate peak annual sales in the $3 billion range, largely because of its hefty price tag of $12,750 per month. Tagrisso could provide Astra with some much needed relief in terms of its falling cash flows and top-line.

Amgen, on the other hand, appears to be in a fairly strong position moving into the new year, and may even be able to support a dividend increase soon, although its current debt-to-equity ratio is a tad worrisome. Though the biotech giant can expect declining sales for some of its key products due to biosimiliar competition, it should be able to counter that with strong sales for a host of medications like Prolia, Sensipar, Kyprolis, and XGEVA, combined with the commercial launches of the cholesterol-lowering drug Repatha, the leukemia drug Blincyto, and the chronic heart failure treatment Corlanor.

Tying it all together
Amgen and AstraZeneca have long been favorite names among income-seeking investors because of their strong free cash flows. However, the patent cliff has put their cash flows under significant pressure. At present, Amgen appears to be in the better position to stave off the looming threat due to the rapid development of its clinical pipeline. AstraZeneca, by contrast, is still a few years away from being able to firmly put the patent cliff behind it. Consequently, investors looking for a sustainable quarterly dividend may want to go with Amgen, and perhaps stick AstraZeneca on the back burner for the time being.