What: General Motors (NYSE:GM) unveiled an all-new 2017 Buick LaCrosse sedan on Wednesday. The new LaCrosse, a premium five-passenger sedan, will arrive at U.S. dealers next summer.

Why it's important: Sales of full-size sedans have fallen across the industry, because more buyers have been choosing crossover SUVs over cars. But the LaCrosse is still an important entry for GM. It's essentially the flagship of the Buick brand, and it still sells well in China, where Buick enjoys a strong following.

It also suggests that GM is putting a little more money and attention into its premium brand. While Buick is just a niche player in the U.S., it's a major part of GM's vast presence in China.

The new LaCrosse carries styling themes that were premiered on the big Buick Avenir concept shown earlier this year. It's a handsome look that is fully up to date, but that brings forward cues from classic Buicks from the 1950s and 1960s. Expect elements of the new LaCrosse's look (the grille, for instance) to spread across Buick's global lineup over the next few years.

What's new about it: Simply put, everything. The 2017 LaCrosse is new from the ground up. It's the first model built on GM's new P2XX architecture, an enlarged version of the E2XX architecture that underpins the new-for-2016 Chevrolet Malibu.

Like the new Malibu and other recent GM sedans, the 2017 LaCrosse is longer, lower, wider -- and lighter -- than the car it replaces. That's all thanks to GM's "mixed materials" approach, which combines aluminum, steel, and high-strength composites to create a stiffer, yet lighter, vehicle structure. 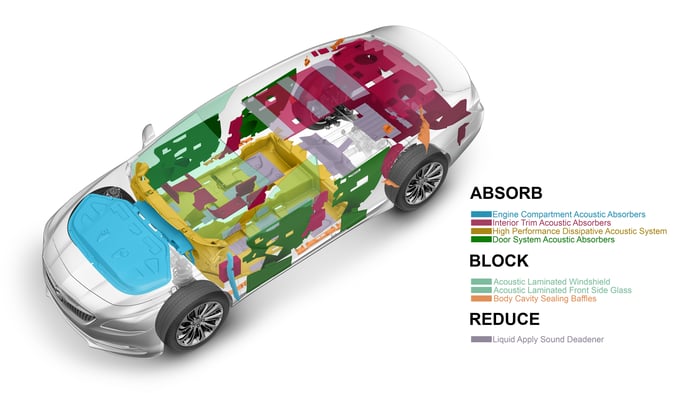 GM released this graphic to show the emphasis it placed on making the new LaCrosse quiet inside. Image source: General Motors

That "lightweighting" pays dividends across the board. The 2017 LaCrosse is roomier inside than the outgoing model, and it should be quieter, nimbler, and more fuel-efficient on the road.

Inside, there's a cleanly styled new interior, and a long list of luxury features, including massaging seats, high-quality leathers, a heads-up display, and the latest iteration of GM's cell phone integration systems. GM says that a great deal of attention was paid to making the LaCrosse quiet inside, with improved door and body seals, better sound insulation, and active noise cancellation borrowed from the latest Cadillacs.

There's only one engine choice on the new LaCrosse, but it's not a bad one: It's GM's new 3.6 liter V6, an advanced engine that has received very good reviews in other models. In the LaCrosse, it will make 305 horsepower. That's not hot-rod territory, but it should be ample to make the Buick feel brisk on the highway.

Will it sell? GM positions the LaCrosse against premium mid-size cars like the Lincoln MKZ and Lexus ES 350. Ford (NYSE:F) unveiled an overhauled version of the MKZ this past week, with a new grille, a revamped interior, and a new optional 400-horsepower engine. The LaCrosse won't beat the 400-horsepower MKZ in a drag race, but it offers more space inside, particularly in the back seat.

It's arguably better-looking than both the new Lincoln and the Lexus, and its classic styling should play well especially in China. And it should be a good bet on the quality front: Buick's quality ratings have risen to match Lexus parent Toyota's in recent years.

But that said, as I noted, big sedans in general haven't been strong sellers lately. U.S. sales of the current LaCrosse, the MKZ, and the Lexus ES series are all down significantly this year, while SUV sales have soared.

Still, the new LaCrosse looks like a major step up from the car it replaces, another in GM's recent string of strong new products. For GM shareholders encouraged by the General's recent competitiveness and emphasis on good profit margins, that's good news.