Like much of the oil and gas industry, ONEOK Inc. (NYSE:OKE) and its master limited partnership, ONEOK Partners LP (NYSE:OKS), have seen their stocks get hit hard over the past year: 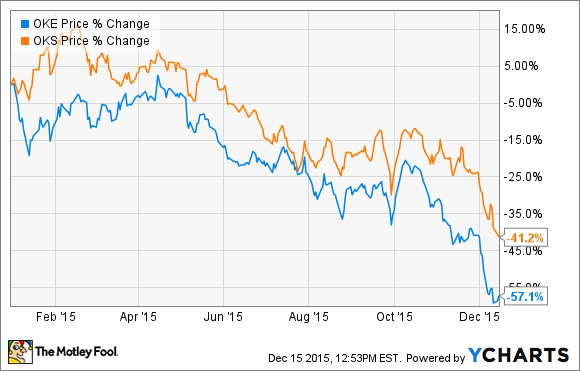 Midstream operators are supposed to be "safe" investments in the oil and gas space, with limited exposure to the ups and downs of commodity prices that have wrecked the rest of the industry. Unfortunately, that's not always the case, as investors have learned (the hard way) with ONEOK.

Let's take a closer look at ONEOK and ONEOK Partners' one move in 2015 that has put the MLP's profits -- and therefore ONEOK's as well -- at risk and what management has done to deal with it.

The vast majority of midstream revenue for the industry is in the fee-based, "toll road" pipeline and storage services. This is and has been the majority of ONEOK's business (by ONEOK, I'm referring to ONEOK Partners, which holds all of the assets. ONEOK's entire revenue and income stream is tied to its equity and general partner holdings in ONEOK Partners), but the company has a much larger exposure to commodity prices than many other midstream companies.

ONEOK Partners operates a significant natural gas and natural gas liquids gathering, processing, and pipeline business. According to the most recent company presentation, ONEOK Partners will end 2015 with 75% of its margin dollars tied to fee-based business, with 16% and 9% tied to commodity prices and commodity differentials.

It's nice that three-fourths of income is relatively secure and predictable via fee-based services, but the real issue with it not being higher becomes apparent when one considers that many master limited partnerships pay out nearly all of their profits -- measured as distributable cash flows -- in dividends.

Which means that a profit shortfall almost always puts dividend payouts at risk. That's been the case for ONEOK Partners this year and, to a lesser extent (since it gets more income from ONEOK than it needs to support its own dividend), for ONEOK.

The company has been able to move the needle over the past few quarters, through both renegotiated and new contracts with better fee structures and lower commodity exposure, but the negative impact of commodity prices has probably lasted much longer than management expected it would. And this has significantly affected the partnership's ability to cover its dividend the first three quarters of the year. 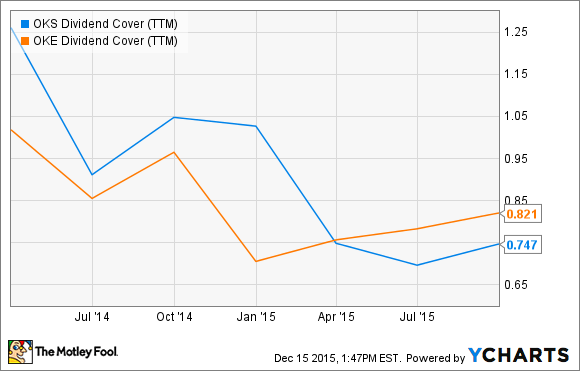 A coverage ratio below 1 means it's paying out more in dividends than it's making in profits. The good news is that the ratio is trending up, but if not for a substantial cash infusion from ONEOK earlier this year -- via buying 21.5 million shares of the MLP -- ONEOK Partners wouldn't have enough cash for both its capital investments and its dividend.

Here's the bottom line: Taking on the risk of commodity prices isn't necessarily a bad thing. But when you're counting on that income to pay a regular dividend, the risk outweighs the benefit and the downside is what's happened with ONEOK Partners in 2015. Luckily, ONEOK itself has maintained a strong balance sheet and creditworthiness, allowing it to support its MLP in the manner it has.

Without that financial backstop, ONEOK Partners would have slashed its payouts by now, and ONEOK would have been forced to follow suit.

Looking forward
ONEOK Partners is on track to reach management's full-year financial guidance from the first quarter, but it took a $750 million cash infusion to keep the MLP's distribution afloat. And that infusion came via share dilution, which means profits must be spread over more shares. In other words, the MLP will pay out more dividends in 2015, even though the per-share distribution remained flat. That's less than ideal for unitholders that are not ONEOK itself.

But with that said, the company has done a solid job of balancing and reducing its commodity exposure, even if it started the downturn with too much exposure to begin with. The trick going forward, of course, is whether it can continue to shift even more of its revenues away from commodity prices and lock in more predictable cash flows.

If management is serious about getting ONEOK Partners to a 1.0 or higher coverage ratio in 2016 without having to cut the dividend, they must keep making progress on this front. Sure, there will be some lost upside when NGL prices rebound, but if management intends to keep paying out so much of cash flows in profits, predictability and reduced risk are much more important than high-risk upside.