Moving into community solar farms could help SolarCity with some of the challenges that have plagued the company this year.

The year 2015 hasn't been a great one for SolarCity Corp (SCTY.DL) as residential solar installations fell short of expectations and sales costs exploded upwards. But as the company moves into 2016, it's starting to position itself as a stronger organization despite the short-term weakness investors have seen.

One of the best moves the company has made is something that's had little to no impact on the bottom line thus far, but could in the future -- and that's getting into community solar in a big way.

What is community solar?
As the solar industry has matured in the U.S. there have been two primary business models employed. Either a large project is built and the energy is sold to a utility with a long-term contract, or solar panels are put on the roof of a home or business, and the owner of that building either buys the system, or leases it from the developer.

But an emerging model is a community solar farm where the energy is sold to a group of buyers, or even renters who may not otherwise be able to go solar. A group of people sign up to buy energy from a solar farm that may, or may not, be located near them. In the case of the community solar program in Minnesota, where SolarCity says it may build up to 100 MW in capacity, those who sign up get a discount on their electric bills.

The attraction to SolarCity is that the utility is involved in the process of customers going solar. This comes with a lower counterparty risk for SolarCity than a lease with a homeowner, and makes for a less contentious relationship with the utility.

This could be big
SolarCity knows this isn't a big market today, but sees it as a huge opportunity in the future. According to GTM Research, there were 65.9 MW of community solar installed in 2014 out of 6,201 MW installed in the U.S. But GTM Research believes that will grow to 465 MW in 2016, as companies like SolarCity start focusing on these projects. 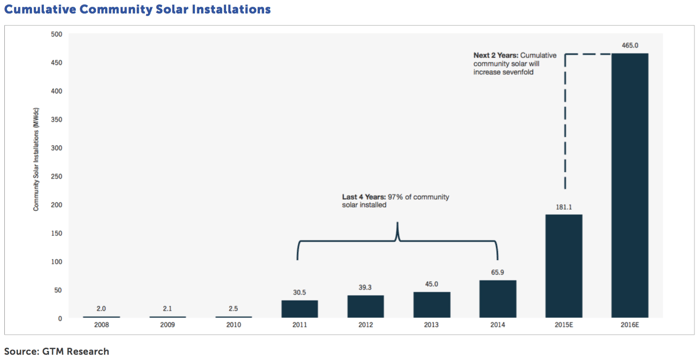 Another business model would help SolarCity
Part of SolarCity's challenge this year is that investors have begun to question the value of its power purchase agreement/lease that counts on homeowners paying bills consistently for 20 years or more. The company is trying to diversify to into new markets and counterparties, targeting commercial customers heavily with new products, and now adding community solar farms to the model. That diversification could be a benefit to the company long term.

Plus, community solar could help the company reduce sales costs per watt and increase growth. Considering those were two challenges it struggled with in 2015, this was a big announcement for SolarCity.