The U.S. Energy Information Administration routinely puts out a Short-Term Energy Outlook, and one component of that outlook is an oil price forecast. Last year at about this time, its STEO forecast that crude would average around $77.75 per barrel in 2015. That said, knowing the historical volatility in oil prices, the EIA did have a range of potential prices, which are detailed in the following chart: 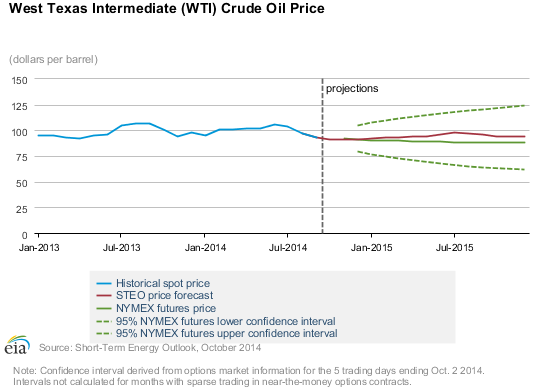 While the EIA expected crude to stay right around its then-current price of about $75 per barrel for 2015, it did see the possibility for crude to range as high as $125 to as low as $50. In fact, there was 95% confidence that $50 was as low as crude would go in 2015. Unfortunately, the forecast was way off: 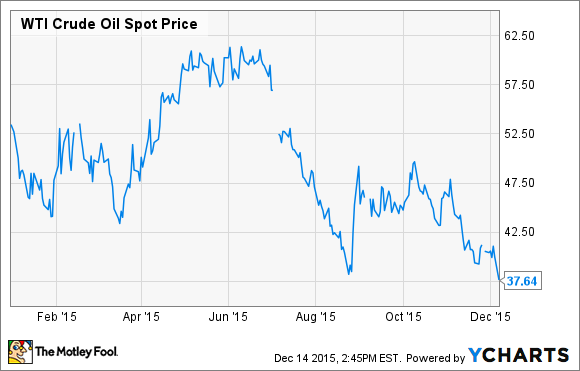 Crude never even came close to $75 all year, and it recently touched a low of $35 per barrel. Here's what went wrong with the forecast.

It all starts with supply

While the initial downturn in crude prices in the middle of 2014 was driven by weaker-than-expected demand, the crash in crude was largely caused by oversupply. That's because producers around the world refused to tame production after tepid demand growth began to emerge. In fact, OPEC, which typically reduces its supply when demand weakens, actually accelerated supplies in a battle for market share. Just recently, it increased its output ceiling from 30 million barrels per day to 31.5 million barrels per day largely because it was already producing at that higher level.

The resilience of U.S. producers wasn't the only supply concern weighing on oil prices this year. The market is also concerned that it is about to be flooded with new oil from Iran after its nuclear deal with the west will lift the sanctions that kept its oil off the global market. Iran said it will immediately boost its output by 500,000 barrels per day as soon as the sanctions have lifted, which is putting even more pressure on oil prices.

So much oil with no place to go
With oil producers pumping more oil than the market can handle, it is causing a great deal of it to pile up in storage. According to the EIA, there's over 485 million barrels of oil in storage in the U.S., which is a level not seen at this time of year in the last 80 years. This is breeding concern that the U.S. might run out of oil storage space, which is another weight on the price of oil.

In fact, with so much oil in storage, it has forced companies to look outside the box for places to store excess oil. One place that's increasingly being used is tanker ships that are just being parked out at sea. Nordic American Tanker (NYSE:NAT) recently noted that lower oil prices have resulted in "large volumes of oil being produced, shipped and also stored" and that "has increased demand for our vessels." According to Nordic American Tanker, this is leading to very robust spot rates that averaged $35,000 per day per ship during the third quarter, which is well above the company's cash break-even rate of $12,000 per ship. That enabled Nordic American Tanker to produce $49.1 million in operating cash flow last quarter, which, for perspective, was only about $15 million less than its entire cash flow during 2014 and 2013, combined.

Investor takeaway
The initial expectation was that oil wouldn't fall any further than it already had, and would actually stabilize at around the then current price of $75 per barrel in 2015. Instead, it fell much worse than expected because no one was willing to turn off their oil pumps. Worse yet, the only place that oil had to go was into storage tanks, which quickly started to fill up, forcing the industry to pay up to store oil in tankers and park them at sea.

Suffice it to say, no one expected any of this to happen when they put together their initial oil price forecasts for 2015.