General Electric is slowly getting rid of the former GE Capital, bit by agonizing bit. But how much longer will it take? And is everything going according to plan?

It all sounded so easy for General Electric (NYSE: GE): refocus on the core industrial businesses for which GE is famous, and get rid of the rest. But so far, it's easier said than done (or at least easier said than completely done). While the sale of its NBC Universal stake and the spinoff of Synchrony Financial (NYSE: SYF) have gone smoothly, what remains of GE Capital is a different story.

It's been more than eight months since the GE Capital divestiture was announced, and there's still no end in sight. Is everything OK?

The biggest success
Just as Rome wasn't built in a day, a huge, diverse business like GE Capital can't be divested in a day, either. And GE has made some big strides forward in the process.

The biggest was the spinning off of GE Capital's private-label credit card business into a new company, Synchrony Financial. Since its IPO in summer 2014, Synchrony's stock has handily beaten the market: 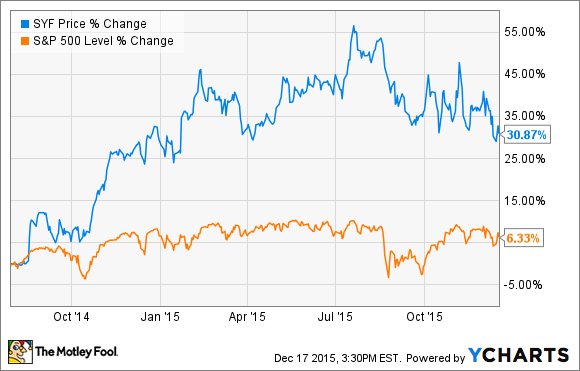 After the IPO, GE owned 85% of Synchrony's shares. It offered a share swap -- investors could trade $100 of GE stock for $107 in Synchrony stock -- and the deal was so popular that it was oversubscribed by 3.2 times.

GE didn't reissue the shares of GE stock that were traded in: They retired the shares to reduce the company's float by 6.6%. By any measure, the Synchrony spinoff has been a major success.

Proceeding apace
The other pieces of GE Capital that have already been sold have mostly gone to banks and private-equity firms. These pieces range from large, such as nearly $13 billion worth of UK mortgages, to small, such as its $1.1 billion Mexican equipment lending and leasing business, sold earlier this month.

In total, these signed transactions represent more than 60% of the former GE Capital. The company's initial goal was to have signed more than $100 billion in transactions by the end of the year. According to a company presentation on Dec. 16, it has signed about $155 billion, with $105 billion already closed. Only about $50 billion remains. That's a lot of progress in just eight months.

It's important to note, though, that that $155 billion is not a cash figure that will then be distributed to shareholders. Instead, it's GE Capital's "ending net investment." If you've never heard of this term before, you're not alone. According to The Wall Street Journal, GE is the only publicly traded company that regularly uses it. GE calculates ENI as the assets in its lending businesses, minus liabilities that don't require interest, such as accounts payable or insurance reserves. GE claims that ENI gives a better sense of the company's position than GAAP figures.

Whether that's accurate or not, it does mean that $155 billion isn't what these assets have been sold for. But we can't find out what they actually have been sold for, because GE isn't disclosing the terms of all these sales. So we have to trust that GE is telling the truth when they say that it will ultimately add up to $35 billion in dividends to be paid from GE Capital to the parent company, which will then be returned to shareholders.

But it's not all for sale. GE is hanging on to what it calls "verticals" -- businesses that offer financing in support of its industrial businesses. These are GE Capital Aviation Services, Energy Financial Services, and Healthcare Equipment Finance. Everything else is up for grabs but mostly consists of real estate, commercial lending and leasing, and all consumer platforms, including U.S. and international banking assets.

You might wonder whether GE will be able to find buyers for the remaining assets. Perhaps the best sold quickly, and the rest will languish. But more than a dozen buyers have already taken pieces of GE Capital, including such diverse organizations as Deutsche Bank, Blackstone Group, and the Canada Pension Plan Investment Board. There's clearly a lot of interest in GE Capital assets, which should mean things continue to go according to plan.

The waiting is the hardest part
Keith Sherin, GE Capital chairman and CEO, has maintained all year that "we expect to be substantially done with our exit strategy by the end of 2016. " GE Chairman and CEO Jeff Immelt echoed that sentiment in a recent investor presentation. Everything seems to indicate that the company is on track to meet that goal. Even if the company falls a bit short and has a couple of financial assets that it can't manage to sell off by the end of next year, it's likely that GE will be able to sell those businesses eventually to someone.

Investors who are patient with GE over the course of the next year as it executes its GE Capital divestiture will probably find it worth the wait.