Dividend Aristocrats. The name is a bit pretentious, yes, but the stocks in this equal-weighted index, which have increased their dividends for at least 25 years consecutively, are (or were) a cut above common stocks.

Still, in any given year, not all of them can be expected to perform well. With less than a handful of trading days left in the year, the following are the three worst-performing stocks of 2015 among the 51 components of the S&P 500 Dividend Aristocrats: Wal-Mart Stores (NYSE:WMT) (-28.7%), Archer Daniels Midland Company (-30.4%) (NYSE:ADM), and Franklin Resources (-35.7%) (NYSE:BEN). Will these three stocks remain Dividend Aristocrats in 2016?

You can't have a negative dividend yield, so these stocks' poor performance was due to significant price declines: 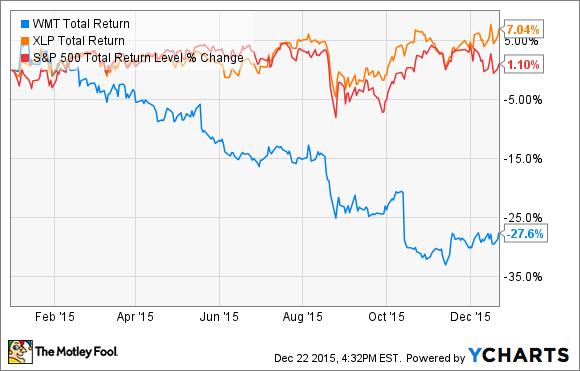 As you can see, Walmart's stock performance diverged significantly from that of the index and the Consumer Staples sector this year. That included a 10% drop on Aug. 14 (the steepest daily decline in a quarter of a century) after the company announced that higher wages would contribute to a 6% to 12% decline in earnings-per-share next year.

Walmart's dividend will be well supported for some time to come: the company may be struggling to grow faster than the economy (or even just keep up with it), but it remains nonetheless a very stable, high-quality franchise with a genuine economic moat based on scale/cost advantages.

Furthermore, the dividend is comfortably covered by earnings: The unweighted average payout ratio over the last four quarters was just 42.9% according to data from Bloomberg (although that ratio has been sneaking up: from 29.1% in fiscal 2010, it increased to 38.5% in fiscal 2015).

(The payout ratio is the percentage of net income that the company pays out in dividends.)

At 14.4 times the next twelve months' earnings-per-share estimate, the shares don't look overvalued, and there is reason to believe that, given a little bit of patience, the price return will be additive to the dividend yield. Investors can expect to earn an adequate total return on a three- to five-year time horizon -- market-beating, but unspectacular.

Much of ADM's decline occurred in November, during which the shares lost 20.3%, though they had already suffered a substantial peak-to-trough loss prior to that.

On Nov. 3, the agricultural commodities trader/processor sorely disappointed Wall Street, with revenues 5.3% below analysts' consensus estimates and earnings-per-share falling short by 13.8%, prompting a 6.8% one-day drop in the stock, according to data from Bloomberg. That was by no means the first time: for the four sets of quarterly revenue and earnings-per-share numbers the company announced this year, six of the eight figures were negative surprises.

Six times bitten, seven times shy: Analysts have repeatedly torn up their estimates for ADM's 2016 results. Over the course of the year, they brought the consensus (adjusted) earnings-per-share estimate down 16.5%, from $3.69 to $3.08, with a similar adjustment to the revenue estimate (-18%).

Archer Daniels Midland has the wherewithal to remain a Dividend Aristocrat next year, but though the shares are cheap by historical standards and relative to its peer group at 11.9 times next twelve months' EPS estimate, this columnist can't get excited about the prospect of owning them.

Despite its scale, ADM doesn't have the makings of a superior business, and it's not clear that it can consistently earn a return over its cost of capital: despite a long history of dividend increases, from the end of the third quarter of 1980 through the end of November, ADM's stock has generated an annualized total return of 9.4% (assuming dividends are reinvested), lagging the S&P 500's 11%. 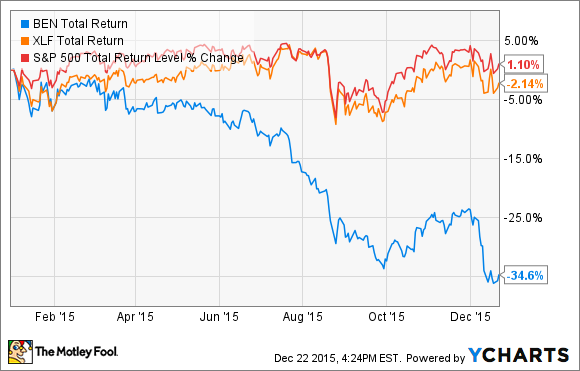 Perhaps you thought Franklin Resources was a mining or energy company (those sectors will certainly figure prominently on "worst-performing" lists this year), but it is actually an investment management company that is better known as Franklin Templeton Investments.

This month, Franklin Resources announced it was raising its quarterly dividend 20% to $0.18, its 36th annual increase, but the market's concern about the asset manager's reliance on funds focused on emerging markets has put enormous pressure on the share price, swamping the dividend return.

Indeed, it's not all positive streaks at Franklin Templeton: in September, the company announced its 16th consecutive month of asset outflows, with assets under management in the global equities business down nearly a fifth (-18%) year-on-year.

(Paired with the debacle in commodities markets this year, emerging markets have become radioactive.)

On paper, fund management companies have some of the attributes of a wonderful businesses in that they require very little in the way of capital and are often highly profitable, with big benefits to scale.

However, assets under management can be flighty; like bank deposits, their staying put is predicated on confidence in the organization they have been entrusted to.

Furthermore, the company's most valuable assets -- the portfolio managers -- can walk out the door at any time. Building a stable, enduring franchise that does not rely on a few stars is very tricky.

Franklin's dividend looks safe enough: the dividend payout ratio was 33.7% in the fiscal year ended Sep. 30; it has never exceeded 61% since 1990. And, on paper, the shares appear cheap at 11.6 times next year's earnings-per-share estimate.

Nevertheless, for the reasons cited above, this columnist can't muster much enthusiasm for them (for a sobering example of what can happen to a well-respected fund house, take a look at Legg Mason's 10-year share price graph.)