The biotech industry is finally starting to cool off after more than five straight years of blistering returns. The past few years have been witness to an explosion in clinical innovation that was originally spurred by the ongoing loss of patent protection on some of the world's biggest drugs. 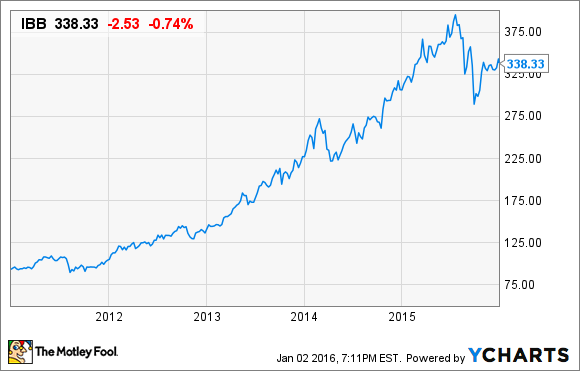 What this means for investors is that 2016 will probably turn out to be a true "stock picker's market" when it comes to biotechs at least. Put simply, it's unlikely that investors can simply buy a handful of biotechs, seemingly at a random, and subsequently produce market-crushing gains in the process.

So where should investors start their search for unusual returns in biotech this year? My money is going to be on the emerging cancer immunotherapy space, especially in the small- to mid-cap regions of this sub-industry.

My reason is simple enough. Even though this space is just starting to gain traction in terms of regulatory approvals, it already accounted for around 50% of all oncology drug sales in 2014, racking up an estimated $41 billion in revenue, according to a report from Research and Markets. And going forward, some industry experts believe cancer immunotherapies will gobble up over 60% of the entire oncology market by the end of the decade, giving this group of stocks a great shot at producing stellar returns for patient investors.

Which cancer immunotherapy companies offer the best prospects in 2016?
The first thing to know is that this year should prove to be a turning point in the fight against numerous blood-based cancers and hematological disorders in general, with dozens of clinical updates from so-called "modified T-cell therapies" expected to hit the street in the second half of the year.

Interestingly enough, Wall Street has already started to put its weight behind the leaders in this area, such as Juno Therapeutics (NASDAQ:JUNO), Kite Pharma (NASDAQ: KITE), and ZIOPHARM Oncology (NASDAQ:ZIOP). Each of these clinical-stage biotechs, for example, currently sports a market cap in excess of $1 billion.

While I agree with the Street's optimistic outlook toward these stocks in general, I believe that the unheralded Bellicum Pharmaceuticals (NASDAQ:BLCM) will prove to be the best performing stock among modified T-cell developers in 2016. Truth be told, the market hasn't paid much attention to Bellicum lately, evinced by its tiny market cap relative to its closest peers: 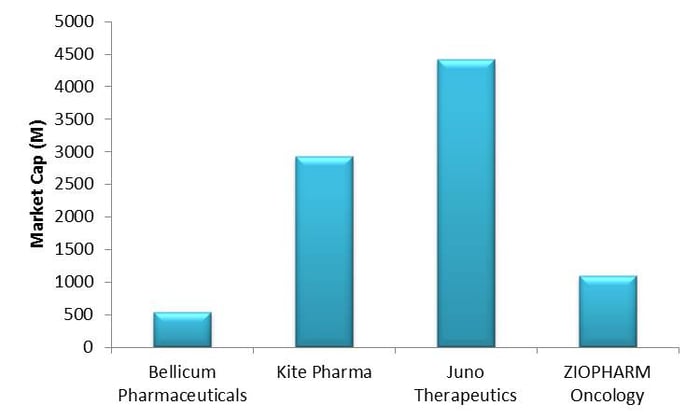 However, Bellicum's molecular switching platform designed to give its modified T cells both a "brake" via an off switch in the event a patient reacts badly to the treatment, and/or a "gas pedal" that can ramp up an therapeutic response, is an extremely intriguing approach to cell-based therapeutics.

Why could Bellicum stand out from the crowd in 2016?
Besides having a tiny market cap relative to its peers and perhaps one of the most potent modified T-cell platforms in existence, Bellicum is going after absolutely huge game with its lead product candidate BPX-501. This genetically modified T-cell product carries the company's so-called "safety switch" and is administered to patients following allogeneic hematopoietic stem cell transplantation (HSCT).

The overarching issue to understand is that allogeneic HSCT is known to be curative, or at least result in long-term remission, in dozens of hematological disorders, along with many blood-based cancers. However, it's rarely performed because of the serious risks of graft-versus-host disease (GvHD) and acute infections that often lead to death. Basically, allogeneic HSCT is a treatment of last resort for most patients, despite its potential of being a truly disease-modifying form of treatment.

In a nutshell, Bellicum's goal with BPX-501 is to make allogeneic HSCT safer by reducing the severity of these adverse effects on the health of patients during and after treatment.

On the GvHD front, for example, BPX-501 can be turned off by administering a small molecule drug known as rimiducid, quickly leading to a reduction in symptoms associated with GvHD. Turning to the infections that are so commonly associated with this procedure, one of BPX-501's main therapeutic benefits is that it plays a critical role in reactivating the immune system, whereby helping to stave off deadly infections.

Right now, the company is assessing BPX-501 in several early and midstage trials in adults and pediatric patients with leukemias, lymphomas, and genetic blood diseases in the U.S. and Europe. The good news is that the interim data from some of these trials, presented last month at the American Society of Hematology annual meeting, seems to warrant further development, with Bellicum possibly launching a late-stage trial in 2016.

The bottom line is that Bellicum's lead product candidate could end up becoming an essential part of the standard of care for numerous hematological malignancies, giving it megablockbuster potential. The downside is that Bellicum is relatively well-behind Kite Pharma and Juno Therapeutics in terms of the progress of its most advanced experimental candidate. And it's neck and neck with ZIOPHARM in the genetically modified T cell arena targeting blood-based malignancies.

Having said that, I think all of these stocks will rise in 2016 as the field matures as a whole. And Bellicum in particular should finally start receiving the attention it deserves in light of the company's exciting cell therapy platform.