Find out about a high-yielding energy stocks are being mispriced by the market, and how your portfolio can benefit in 2016 and beyond.

The worst oil crash in a generation has hammered energy stocks over the past 18 months, including midstream MLPs. However, in this sea of despair, I believe long-term income investors have an amazing chance to benefit from Wall Street's misguided focus on short-term volatile energy prices. 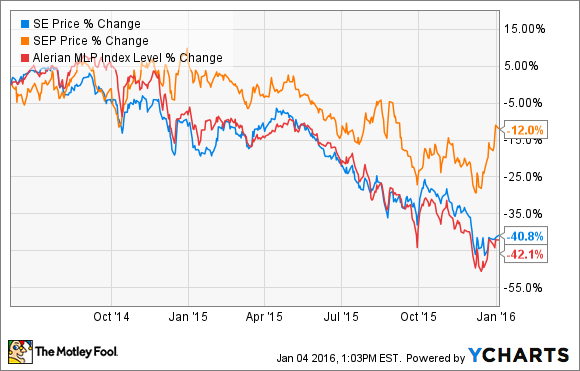 Since oil prices peaked in June 2014, Spectra Energy Corp. (NYSE: SE) has been brutalized, while its MLP, Spectra Energy Partners (NYSE: SEP), has seen a modest decline. Let's look at why this presents a potentially unique opportunity that can not only provide strong, secure income, but also potentially supercharge your portfolio in the years to come. Why Wall Street is wrong about Spectra Energy Corp.'s valuation

The market is currently valuing Spectra Energy Partners at a premium to its GP, even though Spectra Energy Corp. has a long-term payout growth advantage over its MLP. There are three possible reasons for this mispricing.

The second reason is that Spectra Energy Corp. owns 50% of the general partner interest in another midstream MLP, DCP Midstream Partners (NYSE: DPM). It has come under strain as of late from declining natural gas liquids prices, and as a result both Spectra Energy Corp. and Phillips 66 (NYSE: PSX) -- which owns the other half of DCP Midstream's general partner stake -- have had to bail it out.

So Wall Street is now valuing Spectra Energy Partners higher than its GP because it isn't tied to DCP Midstream since there may be concern that DCP Midstream will need additional future bailouts.

While true that current NGL prices as well as a relatively high leverage ratio means that DCP might find it hard to raise new debt, I think the threat of future DCP bailouts is overblown. This is because that massive investment by the U.S. petrochemical industry to use cheap NGLs to produce high-value export products is likely to greatly increase NGL demand, and thus prices, in the future. In 2015 they are expected to generate $1.14 billion in EBITDA, almost entirely from fixed-fee, long-term contracts that have little exposure to energy prices barring a forced negotiation due to some energy producers being unable to pay the negotiated rates. These subsidiaries are also completing about $2.5 billion in expansion projects between 2015 and 2017, which means their rather predictable cash flows are likely to grow.

Bottom line
I see no good reason that Spectra Energy Corp. shouldn't be trading at a premium to Spectra Energy Partners, given its highly favorable ownership of that MLP and superior long-term dividend growth prospects. This creates a rare opportunity for income investors to not only lock in a generous, currently sustainable, and growing yield, but also capture potential capital gains when the market recognizes its mistake.

Adam Galas has no position in any stocks mentioned. The Motley Fool owns shares of and recommends Spectra Energy. The Motley Fool recommends DCP Midstream Partners. Try any of our Foolish newsletter services free for 30 days. We Fools may not all hold the same opinions, but we all believe that considering a diverse range of insights makes us better investors. The Motley Fool has a disclosure policy.