Please ensure Javascript is enabled for purposes of website accessibility
Log In Help Join The Motley Fool
Free Article Join Over 1 Million Premium Members And Get More In-Depth Stock Guidance and Research
By Matthew DiLallo - Jan 5, 2016 at 11:07AM

After a tough 2015, Chesapeake Energy could rebound sharply in 2016. But, it would take a miracle for the company to rally past its all-time high.

After a miserable performance in 2015, Chesapeake Energy's (CHKA.Q) stock is now 93.5% off its all-time high of more than $65 per share, which it set in July of 2008. Suffice it to say, the company has a long way to go to recapture that record, which was set when natural gas prices were north of $13 per Mcf. 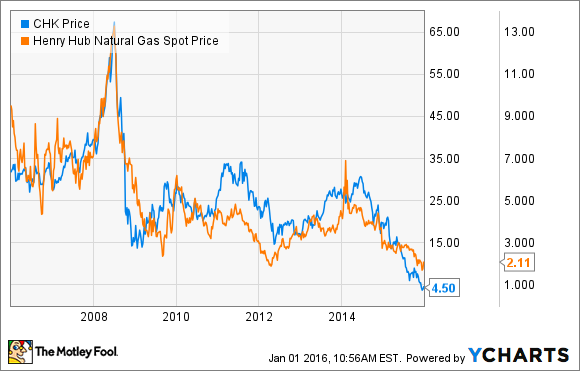 With natural gas now closer to $2 per Mcf, and Chesapeake Energy's debt at what some consider an unsustainable level, we can forget about the company setting a new stock price record in 2016. That said, there is reason to believe natural gas prices could rally in 2016, which could fuel quite a strong rally in Chesapeake Energy's stock price and put its debt worries on the back burner for a while.

The bull case for natural gas
Thanks to a combination of robust natural gas production and a late start to winter, there's 16.5% more natural gas currently in storage than there was a year ago at this time. Further, inventory levels are 13.5% above the five-year average. This bloated inventory is keeping a lid on the natural gas price right now, which is at a 14-year low.

However, there are some signs on the horizon that are bullish for the price of natural gas. In the last week of December, the U.S. experienced a larger-than-expected inventory draw, which sent natural gas prices spiking. Further, recent winter storms suggest that cold weather could be here to stay for a while. In fact, there are some forecasts showing that this winter could end up being colder than expected. Should this winter be 10% colder than projected, it would cause natural gas consumption to be 1% higher than last year according to the U.S. Energy Information Administration. Such a scenario could spark a big rally in natural gas prices.

In addition to the potential for greater natural gas demand this winter for home heating, there are other demand drivers on the horizon. For example, Cheneire Energy (LNG 2.53%) finally began production for the first LNG export cargos at its Sabine Pass terminal in Louisiana. At the moment, the Cheniere Energy facility is receiving 50 million cubic feet of gas per day and expects to have its inaugural shipment ready for export later this month. As Cheniere Energy ramps up its capacity, it could help draw down some of the excess inventory. Further, this company alone will be a major consumer of gas, with it expecting to be consuming more than 3.5 billion cubic feet of gas per day by 2018, which is roughly 4% of current U.S. natural gas production.

Not only are there demand catalysts for natural gas starting to materialize, but there are supply catalysts as well. Chesapeake Energy has already said that due to "expected low prices, we intend to meaningfully reduce our capital spending in 2016," which suggests its production won't grow, and could even decline.

Still, if natural gas doesn't rebound, the company could face a lot more pain in 2016 given that it's debt levels are not sustainable if $2 gas and $40 oil are the new normal.