Until the Federal Reserve incrementally raised them in December, for most of 2015 interest rates continued to motor along at historic lows. As a result, even the most generous dividend-paying stocks returned money well short of double-digit percentage rates.

So our definition of "high-yield" for the year has to be stretched a bit. For our purposes here, we'll say that it's a rate that's at least double the average dividend yield of stocks on the S&P 500, which throughout the year hovered at around the 2% level. Using that criterion, I've picked out three companies that went above and beyond in 2015 to put money back in the pockets of their shareholders. The envelope, please:

Realty Income (NYSE:O)
This venerable real estate investment trust places such an emphasis on its monthly payout, it not only calls itself "the monthly dividend company," it's gone so far as to trademark the slogan. That level of commitment is a big reason Realty Income regularly makes investor lists of top dividend-paying stocks.

What also helps is the company's nearly 50-year history of spitting out those monthly gifts, on the back of fundamentals that always seem to be improving. In the REIT's most recently reported quarter, adjusted funds from operations (a key profitability metric for the sector) rose by a sturdy 16% on a year-over-year basis to $166 million or $0.70 per share -- Realty Income's all-time quarterly record, by the way. 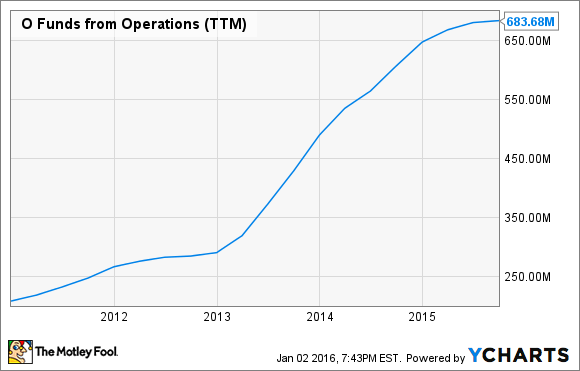 Meanwhile, the REIT's occupancy is nearly at capacity, boasting a 98%-plus rate. Which is no small feat, considering the company has a bulging portfolio of almost 4,500 properties.

At the moment, Realty Income's monthly dividend is just over $0.19 per share. At the current stock price, that yields 4.4%.

HCP (NYSE:PEAK)
Elsewhere in the REIT sector -- a fine source of high-yield dividends, given that REITs have to pay out the bulk of their earnings as such -- is this niche player. HCP has one of the better niches, in fact, as it specializes in healthcare facilities.

That's a sweet spot at the moment, given that the massive baby boomer generation is entering its golden years and will increasingly require medical care. And that demographic is only going to weigh heavier; the percentage of this country's population aged 65 and older is expected to triple by the year 2050.

There's plenty of money to be made in this segment, and HCP has a good track record of making it. Its Q3 2015 adjusted FFO rose by over 5% on a year-over-year basis to $0.79 per share, leaving plenty of cash in the till for some meaty shareholder payouts. 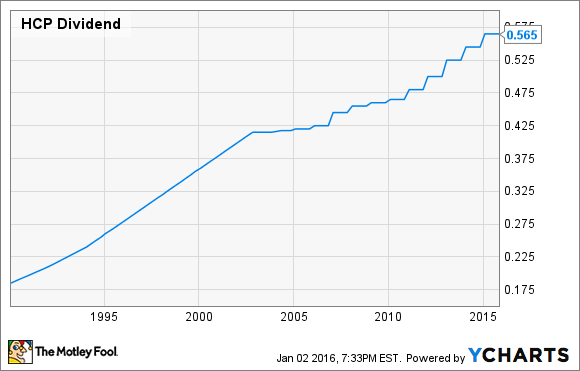 By the way, HCP is a dividend aristocrat, meaning it's one of the market's rare stocks that has raised its dividend at least once annually for a minimum of 25 years running. Said payout currently stands at just under $0.57 per share, which yields 5.9%.

Philip Morris International (NYSE:PM)
For income investors who don't shy away from sin stocks, the tobacco sector provides fertile ground for dividends. It's historically been a high-revenue, high-margin business that throws off a great deal of cash.

Enter Philip Morris International, once upon a time the non-U.S. business of the tobacco conglomerate known as Altria, which admirably continues to thrive despite some stiff headwinds.

In the company's Q3, its net revenues were down by 9% from the same period the previous year, while net profit declined by 10%. But it was comfortably profitable nevertheless, netting over $1.9 billion on $19 billion in revenue. Also, it should be kept in mind that this was despite unfavorable currency developments (i.e., a strengthened U.S. dollar, which reduces American companies' take from overseas), and lingering sluggishness in European markets. 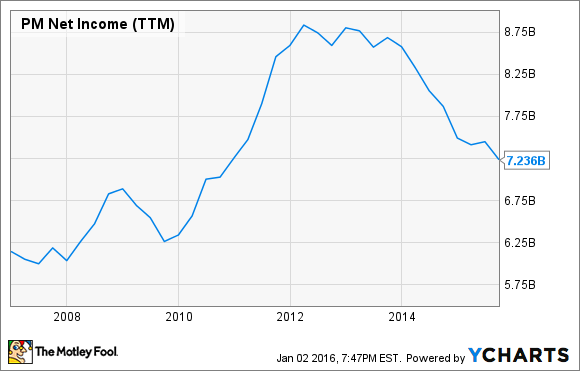 There's also the specter of regulation, with certain countries trying to clamp down somewhat on the cigarette industry in the interests of making their citizens healthier. In this respect, Philip Morris International has somewhat of an easier time of it than its peers that concentrate on the U.S. market, as American anti-smoking laws are comparatively stricter.

Philip Morris International pays a $1.02 per share dividend, high enough to yield 4.6% based on the most recent share price.