Fitbit Inc is focused on a niche market and is dedicated to serving that market better than anyone else. The health-tracking device maker can co-exist profitably with Apple Inc.

If Fitbit's stock price graph were CEO James Park's cardiogram, there would be good reason to be worried about the state of his health and his longevity.

On Tuesday, the shares plummeted 18.3% after the company unveiled its latest model, the Fitbit Blaze, at the International Consumer Electronics Show. The consensus view is that the Blaze is too similar to the Apple Watch. By yesterday's close, shares were down by more than a quarter (-27.3%), resting at $21.50 -- not much above its $20 June 2015 IPO price.

Characteristic of young technology companies with an expected future growth rate that is high but also highly uncertain, Fitbit's shares have been very volatile since the company went public. According to data from Bloomberg, Fitbit's beta measured against the S&P 500 is 2.5, which indicates that the stock is two-and-a-half times more volatile than the index: 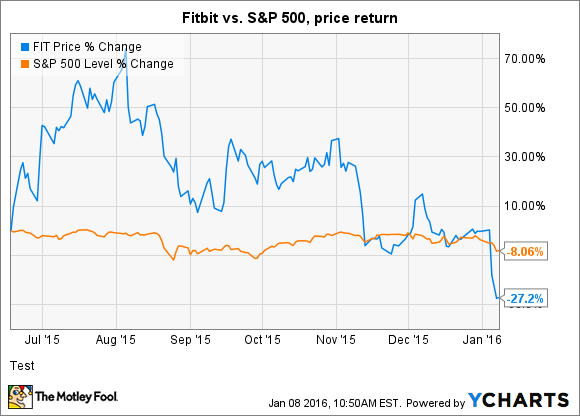 Notice how the S&P 500's August upset barely registers on this graph!

As it is, Park appears relatively detached regarding the goings-on in the stock market, telling TheStreet.com:

It's really difficult for us to control the share price. The best we can do is, we're developing products we think will resonate with the marketplace. So that proof is going to be in the pudding -- we have to focus on growing revenues, growing profits.

That's exactly the attitude long-term, business-focused investors ought to look for in a chief executive.

With regard to the knock that the Blaze is too similar to the Apple Watch, this columnist believes it is based on a misunderstanding of Fitbit's positioning and strategy. Unlike Twitter, Fitibit embraces its niche product positioning with a specific target customer (fitness enthusiasts).

Fitbit is not trying to take on Apple (or anyone else) in the broad smartwatch category, and there is reason to believe both can co-exist profitably.

One, Blaze is fitness-focused, so most of the features are optimized for an active fitness user. Secondly, a lot of the things that are in smart watches I think really overwhelm people. We made trade-offs to include the right set of functionality, and what we gained is something our users really appreciate, which is battery life. Blaze has five days of battery life.

These are genuine differentiators with regard to the Apple Watch.

In general, this columnist is no particular fan of consumer electronics, which is a notoriously competitive business. However, the potential to integrate hardware and software to create a platform alters the dynamics of value creation and risk.

At just above 22 times the next 12 months' earnings-per-share estimate, Fitbit's shares are beginning to look attractive for investors with a three to five-year time horizon and a tolerance for volatility -- though not as attractive as Apple's stock is now.