Air Products & Chemicals (NYSE:APD) has decided to get back to basics, and on Sept. 16 it announced that it would spin off its Materials Technology division in a tax-free distribution. The split is expected to take place this autumn. Management and investors hope that a return to basics will prompt Air Products to compete more effectively in its core business.

Introducing Versum Materials
Based on Air Products' report for the fiscal year ended Sept. 30, 2015, the Materials Technology group, which has already acquired a name and a logo (as shown), will be a $2 billion revenue business with a 22.5% operating margin. Versum is the first- or second-largest player in most of its businesses, and a small multinational in its own right: 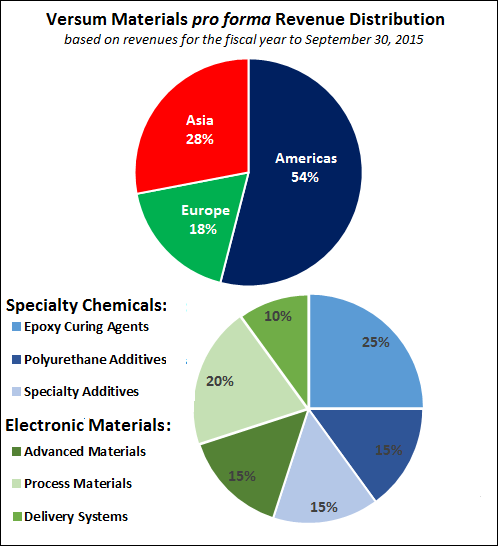 Businesses like the future Versum Materials are difficult to analyze. The pricing of the raw materials they consume is obscure. Each product seems to have different competitors, many of which are so large -- DuPont, 3M, and the like -- that specialty products get lost in the rounding error. Their economic profiles are hard to discern: Since their products have specialized applications, aggregate demand for resins, polyurethane, semiconductors, etc. indicates little about the level of demand for these products in particular. However, as might be gathered from its operating income growth and margin, Versum can be expected to attract a fairly rich valuation, and as a press release on Dec. 15 suggests, its customers in the electronics industry will accept price increases. 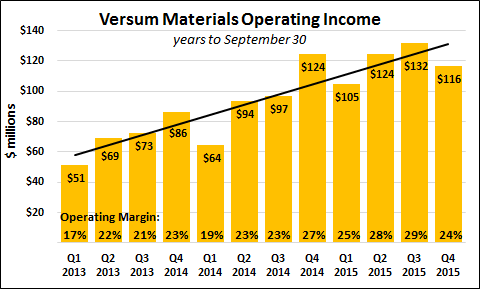 A leaner Air Products
Based on fiscal 2015 figures, after the deal, Air Products will be an $8 billion revenue multinational, with a 17% operating margin. It will be focused almost exclusively (82% of revenue) on industrial gases, with small businesses (8% of revenue) building gas separation plants, manufacturing gas storage, and handling equipment, and two experimental waste-to-energy facilities that have yet to produce any revenue.

Air Products' restructuring plan began with its reorganization at the beginning of its fiscal 2014. The reorganization created three geographically based gases businesses alongside the plant and equipment operation. Over the last year these have, in turn, been structured into more than 40 operating units, each with its own incentive plan. Several layers of management were eliminated, and over the course of fiscal 2015, 1,500 employees  (7.1% of the total) were laid off.

The new structure and the rest of the reorganization is driven primarily by Air Products' decision to decentralize in order to be able to react more flexibly to local market developments in its core industrial gases business. At the same time, it is making major plant investments in Saudi Arabia, South Korea, Texas, and Arkansas.

Air Products' decision to concentrate on its core business comes none too soon. Whether through neglect or poor positioning, having once been the U.S. market leader, it has been shoved decisively into second place by Praxair (NYSE:LIN). It is stronger than Praxair in Europe, but that is a less profitable market, and the two companies are of roughly equal size in Asia. In 2011, Air Products' attempted hostile acquisition of Airgas (NYSE: ARG) was soundly rebuffed, only for Airgas to fall into the hands of L'Air Liquide in November 2015. This formidable combination will create the largest factor in industrial gases in each of Air Products' geographic markets, surpassing Praxair's North American market share and relegating Air Products to third place in its principal market.

There is a risk that this restructuring will be too little, too late. In the nature of the industrial gases market, the largest customers, which are served from on-site facilities, are essentially locked into their existing suppliers by long-term, take-or-pay contracts. These facilities are important, not only for the primary customer they tie to a supplier, but for their additional capacity, which can be used to serve other customers. Gas production benefits from economies of scale, and where a competitor has captured a region's major end-user, other suppliers have difficulty competing with it on price. Air Products' investment program will provide it with more such major customers, but its competitors are equally active in pursuing them.

However, not every customer is near a steel mill or petrochemical complex, and every company in the gases industry has plenty of plants that lack a major customer. Here Air Products' cost-cutting and incentive measures have a chance to create benefits. Most gases are, after all, commodity products, so cost-competitiveness is key to capturing and retaining customers. With equity equivalent to 42.3% of its balance sheet total, Air Products has the resources to invest in this business as well as its on-site activities and to make acquisitions as well.

Although gas production and gas plant equipment appear to complement each other, as businesses they have little in common. The gases business supplies consumables to industry and healthcare, while the equipment businesses manufacture capital goods, some taking years to build. They have a $1.9 billion order backlog, and will complete only about a sixth of that in 2016.Given that Air Products' strategy is to concentrate on its core, sale of these businesses might be opportune at a time when their order books are fat and there is a good chance that they can return to profitability. They would probably benefit: The main customers for such equipment are, of course, industrial gases producers, and Air Products' competitors are unlikely to patronize its equipment businesses. They are unlikely candidates for being spun off, but they would fit naturally into industrial construction companies like Fluor or Bechtel.

Although it is difficult to predict how much, it is likely that the spin off of Versum will release some value -- i.e., the market capitalizations of the separate companies will be greater than that of the combined entity. Air Products' cost reductions are likely to benefit margins through fiscal 2016, and there are almost certainly more to come. The negative comparisons resulting from currency translation will lessen in the second half. Having performed disappointingly relative to the S&P 500 and to Praxair for most of the last five years, Air Products probably merits more careful examination from investors.