Please ensure Javascript is enabled for purposes of website accessibility
Log In Help Join The Motley Fool
Free Article Join Over 1 Million Premium Members And Get More In-Depth Stock Guidance and Research
By Jason Hall - Jan 10, 2016 at 8:00AM

What: December was a hard month for any company related to the oil and gas industry, and offshore oilfield service vessel operators were no exception. The stocks of KNOT Offshore Partners LP (KNOP -0.52%), Hornbeck Offshore Services, (HOS), and Tidewater (TDW) falling 14%, 19%, and 25% last month: 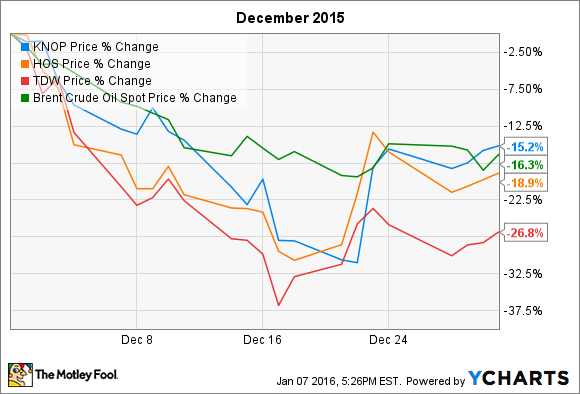 So what: KNOT Offshore Partners operates shuttle tankers, meaning it collects oil produced at offshore wells, and transports that oil to onshore processing facilities. This is coming more common as offshore production moves further offshore and into more remote and harsh environments that make it more costly and difficult to connect to a pipeline. Tidewater and Hornbeck Offshore, on the other hand, operate various offshore service vessels that directly support offshore operations, including platform supply, offshore quarters for crew, towing vessels, as well as vessels to support various exploration activities before drilling activity commences.

In other words, all three companies are completely married to offshore oil and gas production. The bigger-picture fear is that a further protracted low oil price environment will further impact offshore drilling and exploration demand. The concern is simple: The longer oil prices stay down, the longer oil companies will put off developing offshore reserves, which tend to take longer and cost more to develop than onshore oil.

And that would mean extended weak demand for the work that these companies do for offshore oil and gas production. It's pretty clear what the market thinks right now, after an 18-month decline in oil and natural gas prices: 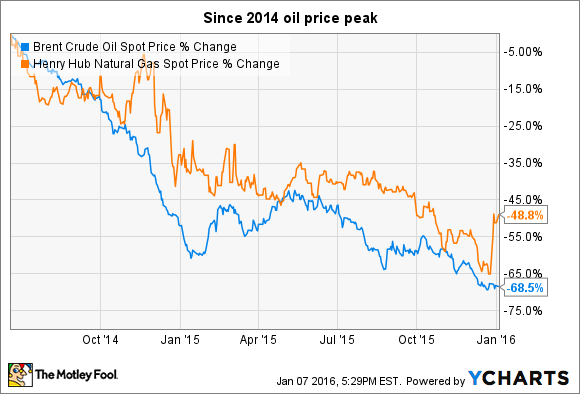 The OSV sector -- which Hornbeck Offshore and Tidewater operate in -- is grossly oversupplied with vessels right now, and there are far fewer drilling rigs operating offshore that need to be supported than there were a year ago. In North American waters there are half as many rigs drilling now than there were last year, according to Baker Hughes, and IHS says that the global offshore contracted rig count has fallen 15% over the past year.

Considering that many of these drilling vessels operate on long-term contracts, we could see offshore rig counts fall even further in 2016, before they recover. That's especially bad news for Tidewater and Hornbeck Offshore. Similar to the offshore drilling contractors, it's simply a matter of supply and demand, and as long as oil prices stay low on too much supply, there will be little incentive for oil companies to develop costly offshore reserves.

Now what: The good news for both Hornbeck Offshore and Tidewater is they have both shown to be pretty solid operators, and are probably built to outlast this downturn. Between the two Hornbeck Offshore certainly has a stronger balance sheet, with more than $300 million in cash, a lot less debt (most of which won't mature for several more years), and a $200 million line of credit at its disposal as well.

And while Hornbeck Offshore will have to use some of that cash in 2016 to fund its newbuild program, the company's operations -- even in the current downturn -- should produce enough cash flows to support operations. Tidewater has a weaker balance sheet and more debt, so there's more risk that it could struggle even more as the downturn continues, especially if offshore drilling outside of North America begins to decline at a higher rate in 2016.

KNOT Offshore Partners is also in relatively good shape, with solid long-term contracts on its current fleet of vessels, and a pipeline of additional vessels also under long-term contracts that its sponsors could sell to it in the future. Furthermore, once these offshore sites begin producing, they don't just get switched off. And if a producer has taken the strategy of using shuttle tankers, it makes it incredibly unlikely that KNOT Offshore would see any of its long-term contracts affected by the downturn.

In other words, this master limited partnership operates in a bit of a niche market, and has a relatively safe and predictable income and cash flows for the foreseeable future. Furthermore, the partnership's debt level is manageable, and it doesn't have any significant amount of debt due for refinancing before 2018.

Looking ahead
Both KNOT Offshore Partners and Hornbeck Offshore deserve a closer look, even with the uncertainty roiling anything oil-related right now. There's a chance both stocks fall further in the short term, but looking at the bigger picture, I think both have relatively strong margins of safety between their balance sheets and current operations, to get them through the downturn in good shape.