Please ensure Javascript is enabled for purposes of website accessibility
Log In Help Join The Motley Fool
Free Article Join Over 1 Million Premium Members And Get More In-Depth Stock Guidance and Research
By Jason Hall - Jan 10, 2016 at 5:20AM

Whether you're just beginning or picking up where you left off, here's a close look at the most important things you need to know before investing a single penny in 2016.

Before you invest another dollar, there are some important things every investor should know to maximize returns, avoid unnecessary costs and losses, and even reduce taxes. Most importantly, it could keep you from making the most common mistake almost every investor repeats.

Use the best tool for the job
Things such as taxes, fees, and matching contributions can have a huge impact on your returns. For instance, if you're not using one or more of the following, you'll probably end up with less money when you need it than you would have otherwise:

Contributions to these kinds of accounts come with a bevy of tax benefits. For example, for every $1,000 you're contributing to a taxable investing account instead of your 401(k), you're paying an extra $150 in federal taxes, based on median U.S. income and tax brackets.Your employer may also match contributions to your 401(k). That's free money -- and it really adds up. If your employer matches 1% of your pay, we're talking about $35,000 over 30 years, based on a 5% annual rate of return.

If you're saving for a child's college, a 529 plan would also cut taxes, since both growth, and distributions for college expenses, would be federal (and state in some states) tax-free.

Simply contributing to the right account could be worth tens of thousands of dollars in tax savings alone.

The key is time in the market, and not timing the market. So if you're saving for your retirement in 20 or 30 years, you're almost guaranteed to see your portfolio quickly lose 10% of its value dozens of times, fall by 20% 10 times, and possibly fall by half once or twice. Those are losses you'll see every time you look at your portfolio.

But it's how much thinhs go up in between the drops that matters. Case in point: 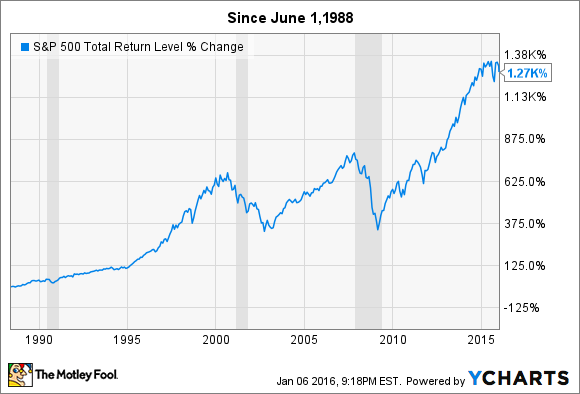 If someone had invested $10,000 in a fund that matched the total returns (i.e., stock appreciation and dividends) of the S&P 500 on June 1, 1988, that person would have $127,000 today. America has gone through three recessions, two major wars, and the worst global financial crisis since the Great Depression, yet through all of that, anyone could have made 12 times the money simply by investing in a large group of U.S. stocks, and then doing nothing for 27 years.

Even after those huge drops in 2001 and 2008, our theoretical investor was still way ahead of the starting point. That's time in the market.

Buy businesses, not stocks
One way to help avoid short-term mistakes is by keeping in mind that you own a piece of a real business. If you make the right decisions, you'll own companies with durable competitive advantages, trustworthy management, and a strong market for their products or services.

Not only can this business-focused approach lead you to invest in higher-quality companies, but it will also be a hedge against letting your emotions take control when the next inevitable downturn happens. After all, if you understand that the business behind the ticker is strong, you'll be much less likely to sell simply because the market is falling.

Now get out of the way
Investing isn't easy -- but we shouldn't make it harder or more complicated. Let's look at what we know, and what we don't.

Put it together, and it's simple. Invest. Stay invested as long as possible. And while none of the things mentioned here guarantee you'll outperform the market, they'll almost definitely help you avoid costly mistakes, and you'll achieve greater wealth than you would've otherwise.