At last week's CES, BlackBerry launched a version of its QNX software to power the self-driving cars of the future. But will tech and auto industry names like Apple, Alphabet, and more adopt this intriguing new technology? 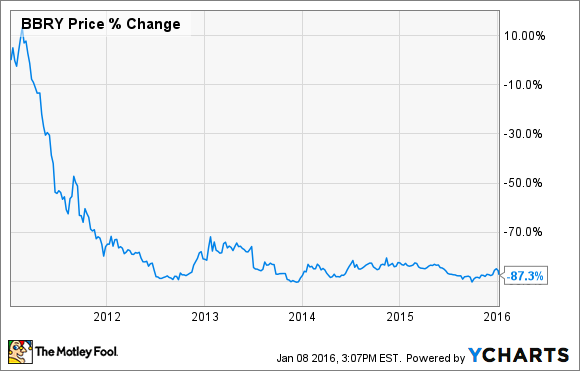 Coming off another down year that caps a five-year stretch in which its shares have lost 87% of their value, the Canadian smartphone pioneer continues to limp along in hopes of eventually finding firmer financial ground in one of its myriad new product initiatives.

In the latest example of its dogged persistence, BlackBerry recently demonstrated a new driverless-car technology it hopes can expand its relevance in what should be one of tech's biggest growth markets in the coming years.

BlackBerry: Your new chauffeur?
Last week at the CES in Las Vegas, BlackBerry made waves when it showcased new in-car technology powered by its QNX operating-system software. The software will allow future automobiles powered by BlackBerry's technology to combine data from cameras and sensors embedded in the car to make real-world driving decisions such as whether to brake, accelerate, or change lanes.

CEO John Chen hopes to make its new autonomous-driving software a foundational technology in the first generation of driverless cars, which some experts believe could reach the road sooner than many consumers realize. Alphabet's (GOOG -1.45%) (GOOGL -1.44%) self-driving initiative is reportedly targeting 2020  as its go-to-market date, which implies it will have cleared all insurance and regulatory barriers, a major obstacle that could slow the technology's deployment. Reports claim that Apple (AAPL 1.04%) has accelerated the timetable for its Project Titan to 2019. And as both the tech and auto industries speed the next driving standards to market, BlackBerry will probably seek to establish its QNX in-car software as an industry standard, which carries with it both risks and opportunities for the Canadian company.

Potential partners?
As BlackBerry's failed smartphone endeavors have demonstrated time and again, having a product doesn't necessary translate to having customers. However, in the case of Blackberry's QNX self-driving-car platform, there's reason to believe it can indeed thrive in the years ahead.

BlackBerry's QNX powers an incredibly diverse set of technologies, one of which is in-car dashboards. Though few perhaps realize it, QNX's in-car current software serves as the operating system software behind Ford, General Motors, Volkswagen, Mercedes,  and the in-car software systems of many of the auto industry's biggest brands. All told, BlackBerry's QNX powers the in-car software of over 60 million cars today. This pre-existing client network creates a natural set of customers to whom BlackBerry can potentially push its QNX self-driving software as well.

Tech companies such as Apple and Alphabet strike me as more natural competitors than allies for BlackBerry. Apple insists that it control the entire hardware and software experiences of its devices, so for Apple to build the software to power Project Titan off BlackBerry's QNX kernel seems like a remote possibility. Alphabet's Google has already created Android Auto as well. And as Apple already owns a mobile OS from which it can build Project Titan, it similarly follows that Alphabet's Google would wish to create its autonomous-auto technology from its Android OS. Apple rarely shares software with third-party licensees. However, it seems likely that BlackBerry and Alphabet's Google will in fact compete head to head to sign up other automakers to use their respective driverless-auto technologies.

However, if BlackBerry can leverage its relative software expertise into a meaningful market share among the automotive industry's numerous self-driving initiatives, the company could indeed carve out a defensible, even profitable, niche in the years to come.