Please ensure Javascript is enabled for purposes of website accessibility
Log In Help Join The Motley Fool
Free Article Join Over 1 Million Premium Members And Get More In-Depth Stock Guidance and Research
By Keith Speights – Jan 14, 2016 at 8:27AM

CEO change? Disappointing 2016 outlook? For this big biotech, there's no need to worry.

Did you hear about the $4 billion batch of bad news from Celgene (CELG)? On Monday, the first day of the J.P. Morgan Healthcare Conference, the big biotech announced a CEO change and provided a disappointing earnings outlook. Shares promptly fell more than 5%, temporarily shrinking the company's market cap by $4 billion. But was Celgene's bad news really that bad?

Musical chairs at the top
Long-time Celgene CEO Bob Hugin is passing the baton to Mark Alles as of March 1. At first blush, that could be a scary proposition. During Hugin's years at the helm, shareholders have seen the stock more than quadruple in price. It will be hard to top that achievement.

Nervous investors will find plenty of reasons to remain calm, though. For one thing, Hugin isn't going anywhere. He will move into the Executive Chairman role and stay actively involved in managing the strategic direction of the company.

Also, Alles seems to be the ideal candidate to continue Hugin's legacy. After all, he played a key role in establishing it. He has been with Celgene since 2004 -- just five years less than Hugin -- after holding management positions with other major pharmaceutical companies. Alles helped lead the global launches of key drugs Revlimid and Pomalyst, and he has served in several capacities within the company, most recently as president and COO.

Probably the biggest question that investors are asking is: "Why now?" My response to that question, though, is, "Why not now?" Hugin is in his early 60s, so full retirement isn't too far down the road. Handing over the reins to Alles at a point where he can continue to stay plugged in for a while makes a lot of sense to me. It allows Celgene to transition to new leadership without taking a lot of risk.

Pessimism over profits
The main reason for Celgene's stock decline wasn't the musical chairs at the executive level. Celgene gave a sneak peek at its 2015 financial results and 2016 outlook, and Wall Street wasn't happy with what it saw.

Celgene expects full-year 2015 product sales to come in at $9.16 billion. That's a little below analysts' consensus estimate of $9.23 billion. The biotech also projected 2015 adjusted earnings of $4.71 per share, less than analysts' average estimate of $4.82 per share.

Looking ahead to 2016, Celgene expects net product sales between $10.5 billion and $11.0 billion with adjusted earnings between $5.50 and $5.70 per share. Analysts were counting on higher sales of $11.14 billion and earnings near the top end of Celgene's range.

Missing Wall Street's expectations for both sales and earnings is a surefire recipe for a stock price decline. Unfortunately for Celgene's shareholders, its pessimism over profits came after the stock already dropped around 10% since the beginning of the year.

Much ado about nothing?
Again, though, was this bad news really all that bad for Celgene? I don't think so. The CEO change shouldn't be a big issue for the reasons I mentioned earlier. And investors need to keep the company's financial numbers in perspective.

Celgene is projecting 2016 sales growth of 17% and earnings growth of around 19%. That's significantly better than what analysts expect for the two biotechs closest to Celgene in size.

Amgen (AMGN -0.34%) is predicted to have only 3% growth in revenue and 6% growth in earnings in 2016. And analysts project that Biogen (BIIB -1.42%) will experience year-over-year earnings growth of less than 12% and revenue growth at barely half that rate.

Granted, Celgene's stock commands a higher premium than either Amgen or Biogen. But look at how these three biotechs stack up when you compare their relative earnings outlooks and their forward earnings multiples. 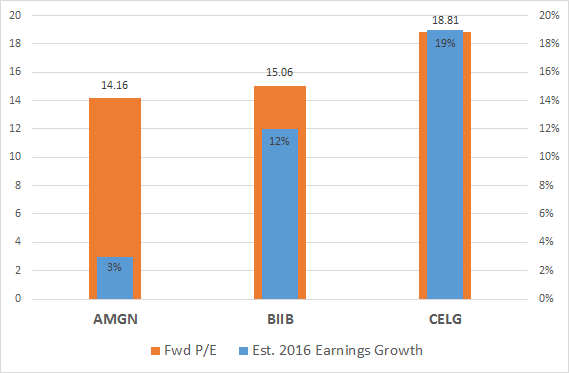 This chart helps us maintain a proper perspective on Celgene's "disappointing" 2016 earnings outlook. Would you rather own Amgen, with a forward earnings multiple over four times next year's expected earnings growth? While Biogen looks more attractive than Amgen, Celgene clearly appears to be the best value, even with its lower-than-desired growth forecast.

There's one other thing to consider: Celgene anticipates that annual revenues will exceed $21 billion with adjusted earnings per share topping $13 by 2020. That's more than double its estimated 2016 levels -- in just four years.

I suspect that some investors who dumped Celgene's stock after the announcements Monday might be rethinking their decision. Shares regained much of their losses the next day. For long-term investors, bad news for Celgene can present good news -- a time to buy discounted shares of a biotech with a very promising future.