And why the gaming stock has tumbled even further since.

What: Shares of Glu Mobile (GLUU) fell more than 37% when all was said and done in 2015, according to S&P Capital IQ data, marking an enormous reversal from the free-to-play games specialist's big gains early in the year: 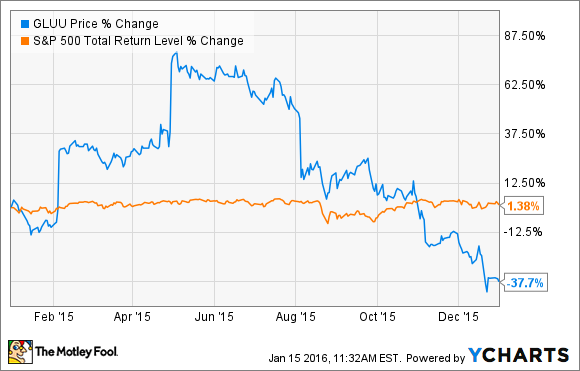 So what: To be sure, Glu Mobile started the year strong, first rising more than 23% in a single day last February thanks to what it described as "ongoing traction" for its wildly popular Kim Kardashian: Hollywood, Racing Rivals, and Deer Hunter 2014 titles. At the time, Glu Mobile investors also cheered a new partnership with singer Katy Perry, which held promise for the the company to extend its strategy of capitalizing on celebrity-centric games. Then in April, Glu Mobile stock once again skyrocketed as much as 26% in a single day after equally impressive first-quarter 2015 results driven by the same slate of games.

But in a testament to the challenges faced by game developers focusing on the "freemium" model, the fun wouldn't last long for Glu Mobile investors. Though Glu Mobile was quick to point out its fiscal second-quarter results released in early August were "significantly" above its own guidance, shares plunged 20% after investors were underwhelmed by weaker-than-expected guidance as the popularity of its key titles began to wane.

Things went from bad to worse in December, after the much-anticipated launch of Katy Perry Pop effectively flopped, leaving investors to question whether similar game deals with the likes of Britney Spears, Jason Statham, and Nicki Minaj would suffer the same lackluster fate.

Now what: Shares have continued their downward spiral so far in 2016, suffering a year-to-date decline of more than 13% as of this writing. This is likely due to a combination, though, of the broader market pullback and investors' pessimism surrounding Glu Mobile stock.

Going forward, investors can expect to receive more clarity on Glu Mobile's future direction when it reports fiscal fourth-quarter 2015 results early next month. But if gamers' early muted response to Katy Perry Pop is any indication, I'm afraid Glu Mobile could have much further to fall from here.