Please ensure Javascript is enabled for purposes of website accessibility
Log In Help Join The Motley Fool
Free Article Join Over 1 Million Premium Members And Get More In-Depth Stock Guidance and Research
By Steve Symington, Tyler Crowe, and Todd Campbell - Jan 16, 2016 at 11:00AM

After the recent market pullback, these cheap stocks could handsomely reward investors.

After a ho-hum year, with the broader market's rising only slightly in 2015, there's no denying most investors are off to a rough start this year. As of this writing, the S&P 500 and the Dow Jones Industrial Average have each declined more than 8% since the start of the year, and the NASDAQ Composite sits off nearly 11%.

But this also means opportunity for patient investors with a long-term view. So, we asked three of our contributors to discuss what they think are the best bargains this market has to offer. Read on to learn which stocks they chose and why.

Steve Symington: I last singled out Whole Foods Market (WFM) in mid-November as a stock the market loves to hate, thanks both to increased competition for its organic wares from traditional retailers, and an ongoing PR crisis related to the company's alleged widespread overcharging of customers in New York by labeling products with inaccurate weights. At the same time, I also credited Whole Foods as quick to address the pricing missteps -- which it insists were unintentional -- in part through better training.

Whole Foods is also moving forward with strategic initiatives to take back market share and revitalize growth, including its new, smaller-footprint "365" store concepts that not only require lower capital investment and labor costs, but also enable the company to enter untouched markets where it simply couldn't physically fit its traditional larger-format stores.

What's more, in early November, Whole Foods management themselves insisted the stock was a "compelling buy" near its 52-week-lows at the time, then put their money where their mouths were by approving a new $1 billion share repurchase program along with the company's prudent new capital structure plan. That plan was designed to take advantage of attractive debt markets and reduce Whole Foods' cost of capital.

Sure enough, Whole Foods stock briefly rebounded nearly 20% from those lows through late December as bargain hunters stepped in, only to follow the broader market back down in recent weeks to almost exactly where it sat two months ago. As a result, I'm compelled to once again pound the table in favor of Whole Foods Market stock.

Todd Campbell: I stumbled upon Depomed (ASRT 0.00%) about a year ago after management outlined plans for Nucynta, an Oxycontin alternative that it had recently acquired from Johnson & Johnson, and despite a big drop in the company's share price into the end of last year, the company remains one of my favorite bargain-bin buys. Here's why.
First, it's growing. The company has made a series of acquisitions over the past few years that have led to its trailing-12-month sales surging to more than $425 million from less than $150 million. Second, it's profitable. The company's buy-and-rebrand strategy has kept costs in check, and as a result, EPS is expected to almost double to $1.59 in 2016.
That growth is pretty compelling, and I don't think it's going to stop anytime soon. The company's relaunch of Nucynta, which included a 44% price hike and a tripling of its sales force, has led to record monthly prescriptions heading into year end, and this month, Depomed reported that year-over-year prescription growth had jumped to 22.3%, up from a pace of just 3.6% six months ago.
Because the company thinks Nucynta could haul in sales of $500 million per year by 2018, sales could hit a billion dollars before patents expire, and industry watchers expect EPS of $1.59 in 2016, up from $0.81 in 2015, I think this stock is pretty darn cheap and intriguing.

Tyler Crowe: If you subscribe to the idea that oil prices today are unsustainable and that we will eventually see some recovery, then there are bargains abounding in the energy sector. There are loads of high-quality companies that have seen their share prices decline 30%, 40%, even 50%. One company that really stands out as a screaming bargain, though, is National Oilwell Varco (NOV 1.03%). Shares of National Oilwell Varco are trading more than 60% what they were 18 months ago, when oil prices started to look shaky. 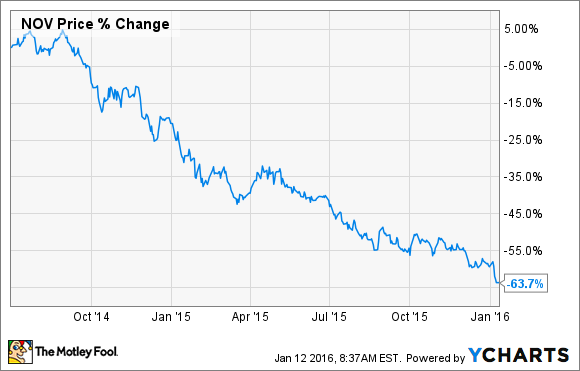 Yes, NOV's business will wax and wane with the amount of drilling activity going on in the oil patch, and the glut of new new equipment like offshore rigs will likely slow down the company's recovery, but equipment gets used up and deteriorates over time and will need to be repaired or replaced. This is what makes National Oilwell Varco so compelling: It's estimated that it owns more than 80% of the market for offshore drilling rig equipment, and its market share is very high in other sectors like land rigs. National Oilwell Varco's rig standardization programs pretty much ensures that the equipment in the field will go back to NOV when it needs spare parts, and spare parts is one of the company's highest profit margin sectors.

I'm not going to pretend to know when the turnaround for National Oilwell Varco will happen. Some of its business segments will turnaround quickly, while others will lag. When the turn does happen for the company, though, investors who have been building a position during this downturn will be sitting on shares with high dividend yields -- more than 6% at today's prices -- and will be very glad they didn't follow the herd on this stock.