Please ensure Javascript is enabled for purposes of website accessibility
Log In Help Join The Motley Fool
Free Article Join Over 1 Million Premium Members And Get More In-Depth Stock Guidance and Research
By Sam Mattera - Jan 16, 2016 at 10:39AM 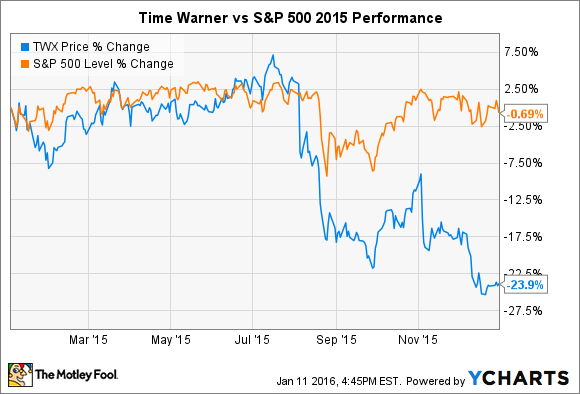 But Time Warner could be poised to rebound in 2016. While there's no guarantee Time Warner stock will bounce back, the following scenarios, should they come to pass, could benefit shareholders.

An activist investor pressures management
In the summer of 2014, 21st Century Fox (FOX) attempted to acquire Time Warner, bidding about $80 billion for the company. Time Warner's management rejected the offer, arguing that it could deliver better value for its shareholders as a stand-alone firm. But since then, Time Warner shares have largely moved in one direction: down. Time Warner stock has fallen about 22% since it rejected the offer on July 16, 2014, and while 21st Century Fox hasn't performed much better, it's possible Time Warner shareholders would have been better off had the company accepted Fox's bid.

Unlike Fox, Time Warner has no single controlling shareholder, leaving it vulnerable to an activist investor. Earlier this month, The New York Post reported that several activist investors -- in particular, Corvex Management -- are considering making a play for the company. According to The Post, Corvex's proposals could include an outright sale of the company or a spin-off of its premium cable network HBO.

On Time Warner's most recent quarterly conference call with analysts, CEO Jeff Bewkes explicitly downplayed the possibility of a breakup, arguing that it was in shareholders' best interests to continue operating as a combined entity. Nevertheless, sufficient activist pressure could arouse interest in a buyer. At the very least, management may be forced to placate activists with other shareholder-friendly moves.

HBO Now sees accelerated growth
In 2013, on the eve of House of Cards' debut season, Netflix's Chief Content Officer Ted Sarandos offered up an assessment of his company's future in an interview with GQ. "The goal is to become HBO faster than HBO can become us," he said.

Two years later, Netflix and HBO are as close as they've ever been. Netflix has ramped up its original content push significantly, launching dozens of original series. Meanwhile, HBO has stepped up its commitment to digital distribution. Last year, Time Warner launched HBO Now -- a purely digital version of the network aimed at those without traditional cable packages.

Time Warner hasn't disclosed just how many HBO Now subscribers it has. Time Warner's CFO Howard Averill said it was showing promise, but that it remained "very much in its infancy." For its first three months, HBO Now was exclusive to the Apple TV and iOS devices, only expanding to other platforms, like Chromecast and the Roku, in the second half of the year. Even with that expansion, Netflix still has a significant lead on HBO in terms of general availability: Nearly all smart TVs, video game consoles, Internet-connected set-top boxes and Blu-ray players can access Netflix -- only a handful are compatible with HBO Now.

HBO has long been a healthy profit-driver for Time Warner, but hasn't seen as much subscriber growth as Netflix in recent years. If Time Warner can continue to expand HBO Now's digital footprint, it could help drive additional subscribers to HBO, which would benefit shareholders.

Cord-cutting fears blow over
A growing number of consumers are choosing to forgo traditional cable packages, instead making due with Internet-based alternatives. According to research firm SNL Kagan, the paid-TV industry lost 625,000 customers in the second quarter of last year. That trend could prove beneficial to Time Warner's HBO Now, but it appears to be weighing on its Turner networks. In November, Time Warner cut its profit outlook for this year, citing a need to invest more in its digital offerings.

Turner, which includes popular cable channels CNN, TNT, and TBS (among others), generated about one-third of Time Warner's revenue last quarter and more than half of its adjusted operating income. Turner's revenue fell 2% on an annual basis, with some of that decline attributed to falling subscriber numbers.

If the paid-TV industry stabilizes, or even adds subscribers, Time Warner's Turner business should improve. For its part, management intends to make its cable networks more attractive to consumers. It's reduced the number of commercials its TruTV network shows, and plans to do the same for TNT. Obviously, those networks make up a limited sliver of a much larger cable bundle, but those steps could help keep paid-TV subscribers from defecting.