Procter & Gamble's (NYSE:PG) quarterly dividend announcement last week served as a reminder on why the consumer goods titan is so attractive to income investors. The payout was extended deeper into its 125th consecutive year, P&G pointed out, for a streak that goes all the way back to its incorporation in 1890.

And as for raises, the company has hiked its dividend in each of the last 59 years -- far exceeding the minimum requirement for status as a Dividend Aristocrat.

P&G is all but sure to extend that epic streak into its sixth decade this spring, when the board of directors typically announces payout boosts. But what about the long-term prospects for this historic dividend?

Sales growth outlook
Steady sales growth is a key reason why P&G has been able to boost its dividend through market crashes, global recessions, and even world wars. As the owner of dozens of leading consumer brands -- from Bounty paper towels to Tide detergent -- its portfolio of staple products insulates P&G from the type of huge demand swings that, say, an automaker must endure.

But revenue growth has slowed down considerably in the past few years. Organic growth was just 1% in fiscal 2015 and sales volume actually fell. By comparison, organic growth was between 3% and 4% in each of the prior two years, helped along by steady volume gains.

With its brand-shedding initiative mostly complete, management believes the company is in position to return to solid gains. It competes in just 10 product categories now, which were picked for their above-market sales and profitability potential. "We are transforming into a faster-growing, more profitable and far simpler company," executives told investors last quarter. Yet that process isn't likely to yield short-term gains: Their outlook leaves open the possibility of zero sales growth over the fiscal year that ends in June.

Earnings outlook
P&G's recent earnings performance has been complicated by the fact that 60% of its business comes from international markets. While that's normally a positive point, it has led to sharply lower profits as foreign currencies dive lower against the U.S. dollar.

Currency devaluations are the main reason why P&G's payout ratio has soared to its highest point in modern time. In fact, the company's 40% profit slump last year ensured that it paid out more in dividends ($2.59 per share) than it booked in profit ($2.44 per share). 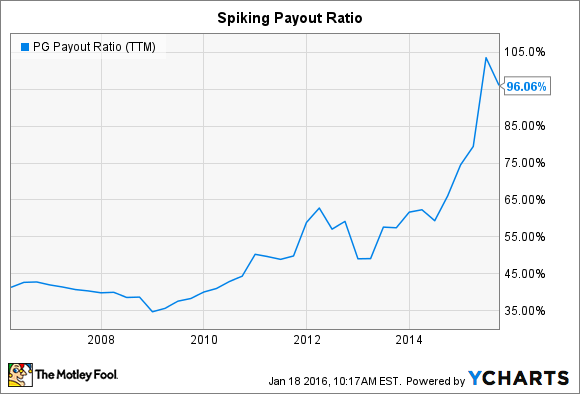 There are two reasons for investors to expect this worrying trend to reverse itself, though. First, it's just not possible for the U.S. dollar to continuously move higher against other currencies. Eventually, that foreign exchange anchor will lessen and even start shifting to P&G's favor.

Second, the company has sliced billions of dollars from its cost structure. Overhead has dropped by 10%, on its way to a planned 30% reduction by next year. Supply chain improvements have helped remove $7 billion out of its annual cost of goods sold expenses, too. And unlike those negative currency issues, P&G's efficiency gains should continue impacting the business for years to come.

But cash flow is one of the best metrics to watch when evaluating the long-term strength of P&G's dividend. Operating cash rose 15% last year even as earnings were almost cut in half. 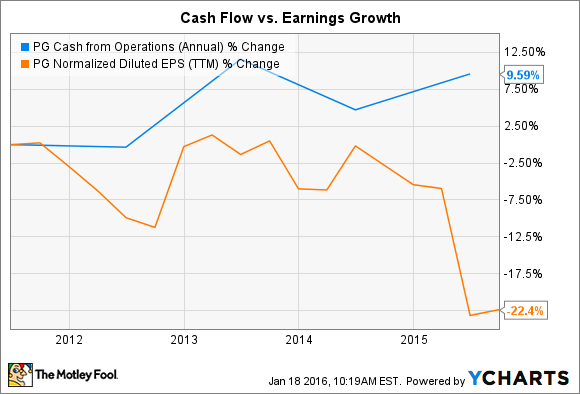 Those cash gains allowed management to deliver $12 billion to shareholders in fiscal 2015: $7.3 billion through dividends and $4.6 billion through stock buybacks. P&G has a goal of increasing its yearly cash return pace up to $17 billion over the next four years. And its growing cash flow and falling costs make that target achievable -- even if the soft global selling environment stretches on.