Please ensure Javascript is enabled for purposes of website accessibility
Log In Help Join The Motley Fool
Free Article Join Over 1 Million Premium Members And Get More In-Depth Stock Guidance and Research
By Reuben Gregg Brewer - Jan 19, 2016 at 11:15AM

Eastern railroad CSX Corporation (CSX 0.13%) plays a key role in the global logistics puzzle. But 2015 was far from a stellar year, with revenues declining year over year in the second, third, and fourth quarters. Although hard work on the cost front can help earnings, 2016 will probably be a bad year if the top line continues to fall.

A solid company
CSX has rails that extend from the top of New York state all the way down to the tip of Florida, covering 23 states in all as it reaches into the middle of the nation. It is a vital link for cargo of all sorts, as it travels through nearly half the country. And with debt at around 50% of the capital structure, a reasonable level for a capital-intensive industry such as railroads, it's a good bet that CSX is going to be around for a long time. 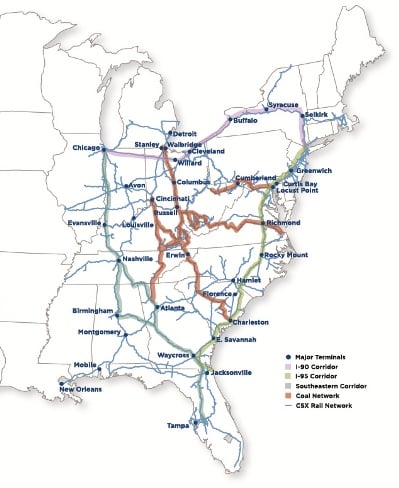 But being in good locations and having a solid balance sheet isn't enough to ensure good financial results. For example, the top-line trend at CSX in 2015 was a little troubling. Year-over-year revenues were up by just half a percent in the first quarter before turning into year-over-year declines through the rest of the year. The decline was a robust 13% in the final stanza of 2015, leading to a full-year revenue decline of around 7%.

To the railroad's credit, it was able to keep costs in check and actually increased earnings by about 4%. But there comes a time when headwinds on the top line can't be overcome by cost cuts and increasing efficiency. And there's a risk that 2016 will be that year.

The problems?
In fact, the company isn't shy about this point, with CEO Michael Ward explaining in the fourth-quarter earnings release, "With negative global and industrial market trends projected for 2016, full-year earnings per share are expected to be down compared to 2015." The most public problem spot for CSX is coal, but that wasn't the only one last year.

Of the 11 shipping areas CSX breaks out, only three produced year-over-year volume increases in 2015: automotive, minerals, and intermodal. Volumes were down in just one business in 2014. And of the three good performers in 2015, automotive is the only one where volume growth didn't decelerate year over year. And even in these three "strong" areas, revenues per unit moved were lower year over year. So the company increased its volume but made less on what it carted on a per-unit basis.

Not-so-happy trend
The big-picture trends at CSX aren't looking good. Yes, the railroad has done a great job at cutting costs, increasing efficiency by 1.8 percentage points in 2015 to 69.7%. But that can only go so far -- the railroad's target is the mid-60% range. Although this is exactly the type of environment in which CSX will have the motivation, shall we say, to cut costs, that won't change the top-line trend. That, in turn, could make 2016 a really bad year for the railroad, which has seen its earnings advance each year since the end of the 2007-to-2009 recession. 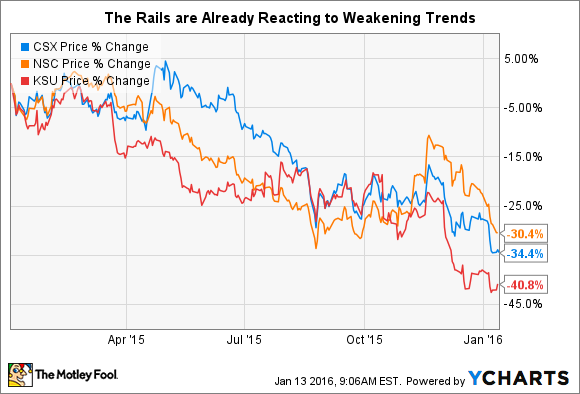 But CSX is hardly alone. In early December, competitors Norfolk Southern Corporation (NSC 0.39%) and Kansas City Southern (KSU) both presented at a conference, offering up less-than-stellar views of the railroad industry's near-term prospects. And while each of this trio has its own cross to bear, the overall theme is consistent: weakness in important business lines. And that could be an even bigger problem if global turmoil, such as what we're seeing in China, turns into a global recession.

The verdict
So will 2016 be CSX's worst year yet? That's probably an overstatement, but it will probably be the worst year since the recession as top-line weakness starts to pull the bottom line down. Add in some economic uncertainty, and CSX investors, who have already seen a notable stock price decline, could be if for another wild ride in 2016.