What: There's no question the market's volatility can be frustrating in the short term, and frustration is likely what investors of Kandi Technologies Group (NASDAQ:KNDI) are feeling as the company's stock price is plunging 16% at 11:00 a.m. ET on Wednesday. 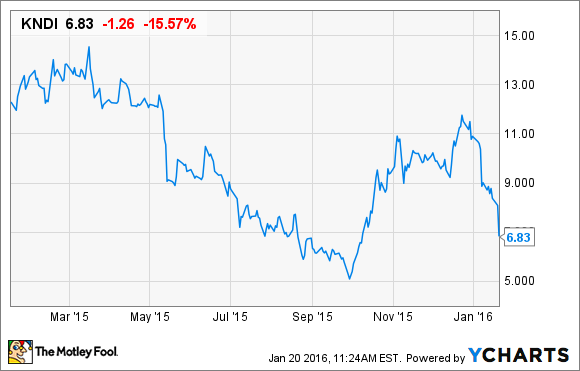 So what: Despite little to no news directly impacting Kandi's stock price this morning, the continued sell-off in energy and broader markets is bringing a lot of pain for everyone in the game. In fact, much of the recent news from Kandi has been positive.

A little over a week ago, Kandi announced that its sales exceeded its forecast by 5% or more during 2015. Also, Kandi's Model K17 (Kandi Cyclone) was given an award for China's 2015 Pure Electric Passenger Vehicle of the Year, during the Global New Energy Vehicle Conference held last week. Lastly, Kandi also recently announced that its Micro Public Transportation program -- which provides a shared pure electric vehicle transportation platform to urban residents -- has expanded to 16 cities in China by the end of 2015, which was slightly better than its projected 15 cities.

Now what: Sure, in the short term, there's going to be more pain for Kandi as broader markets continue to slide amid a dive in oil prices and other global macroeconomic concerns. However, Kandi is still well positioned given the robust growth potential in China's electric vehicle industry over the next few years as the Chinese government continues to pour billions into subsidies, grants, and infrastructure to strengthen its electric vehicle industry.