The government services contractor held firm on its 2015 guidance, but its earnings forecast for 2016 is half of what analysts were projecting.

What: Pure-play government services contractor Engility Holdings (EGL) shares are down more than 41% at 11:40 a.m. ET following the company's pre-market opening press release, detailing management's updated earnings guidance for 2015, and issuance of its guidance for fiscal 2016. That puts the stock down by nearly half just three weeks into the year: 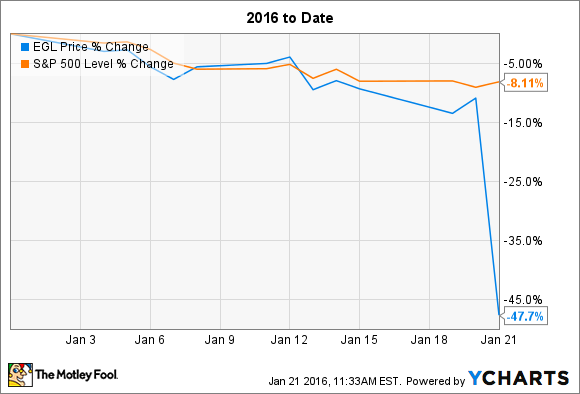 So what: While management reaffirmed its guidance for fiscal 2015, which should be reported in the next several weeks, guidance for 2016 has shaken up investors.

As you can see, GAAP earnings, adjusted earnings per share, and earnings before interest, taxes, depreciation, and amortization are all expected to fall sharply in 2016.

Now what: It's not all bad, as the company continues to work through its acquisition and integration of TASC, and expects to see cash flows from operations increase in 2016. This is partly because of improved operations, but also because of some delays in payments at year-end, which will push some cash flows from 2015 into 2016.

But overall, now may not be the best time to invest in a pure-play government services contractor, as the military has been scaling down much of its operations abroad over the past several years and that seems likely to continue, barring a major entry into the Syrian conflict to fight ISIS.

The company is working to grow other segments of its business, but is likely to face further headwinds in coming years that limit its opportunities to grow in the public sector.