Our lineup of early 2016 lifters includes an auto giant, a veteran REIT, and an ambitious insurer.

Nothing, it seems, can stop a company determined to return more of its earnings to shareholders. Last week was an ugly one for the markets, but even in the face of turmoil several companies -- some quite powerful -- raised their dividends nevertheless.

Fresh dividend declarations are coming down the pipe now that our first earnings season of 2016 is kicking into gear; we should expect more increases to be declared over the next few days, no matter how bearish the market gets. We had a host of raisers to choose from for this installment of our series; here are the three selections.

General Motors (GM 3.12%)
Declining fuel prices and a healthy economy are a potent combination for automobile makers -- no wonder the industry has been doing so well lately. Another piece of evidence that the sector's barreling along is the dividend raise announced by General Motors (GM 3.12%) last week, which will bump its quarterly distribution by 6% to $0.38 per share.

The auto giant is fully expecting to have more in its coffers for that enhanced payout. Concurrent to the dividend raise announcement, General Motors lifted its guidance for fiscal 2016 earnings. This is now $5.25 to $5.75 per share, up from the previous $5.00 to $5.50. 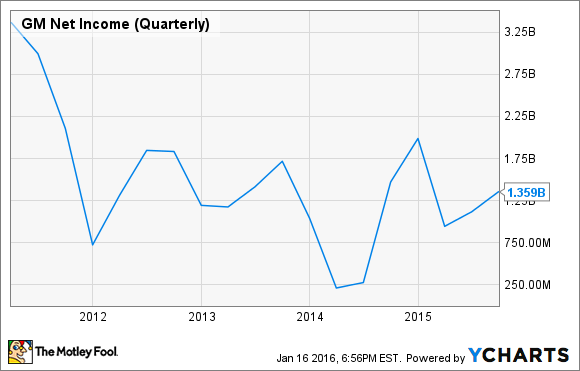 In addition to the helpful developments in the broader economy and in the oil price, General Motors has benefited from an emphasis on maximizing its invested capital, rather than pumping up sales. That bodes well for the future, as there are plenty of inefficiencies to cut, and enough strong potential to realize.

I like General Motors' (relatively) new focus; I think it's a smart, practical strategy that's already working. It is, of course, still somewhat early in the game to tell whether it's a viable long-term approach, so we probably shouldn't bet the farm on this dividend. But it's looking pretty good just now.

General Motors hasn't yet announced the record and payment dates for the new dividend.

Realty Income
There it goes again; real estate investment trust Realty Income (O 0.73%), famously "the monthly dividend company," has lifted its payout for the second month in a row. Its new distribution is 5% higher than its predecessor, at just under $0.20 per share. The REIT is certainly no stranger to dividend raises -- this is its 84th since went public in 1994. 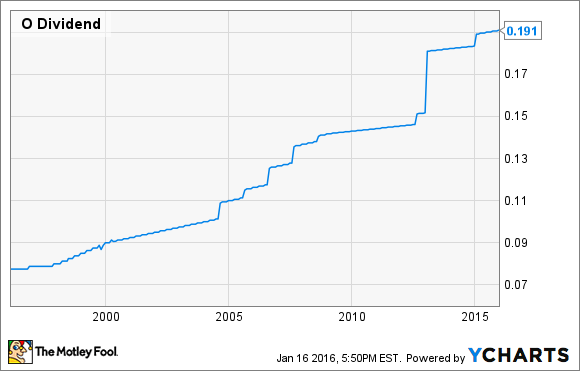 It continues to do well, and to thrive. In its most recent quarter, the company's adjusted funds from operations (an essential profitability metric in the REIT world) saw growth of 16% on a year-over-year basis, to $166 million. That's particularly impressive given how prominent and established Realty Income is on the REIT scene.

It's also big and popular, two factors that help boost those results. All told, it holds almost 4,500 properties across the U.S. and Puerto Rico, with overall occupancy topping 98%. This is not, by any remote stretch of the imagination, a company hurting for tenants.

I see little reason why Realty Income's results would start flagging soon, and even less why it wouldn't be able to bump that payout again before long. This distribution is extremely secure, in my opinion.

Realty Income's freshly raised dividend is to be dispensed on Feb. 16 to shareholders of record as of Feb. 1.

Universal Insurance Holdings
It's not one of the better-known insurance companies, but it is currently among the most generous in terms of dividend policy. Universal Insurance Holdings (UVE 0.08%) last week declared a quarterly dividend of $0.14 per share, a robust 17% improvement over the previous payout. The company likes bumping the distribution; this is the third raise it has declared since 2013.

That tendency is indicative of the company's ambition, which is to be a serious national incumbent. From its home base of Florida it has been spreading out through the country, and (as of its most recently reported quarter) it has a presence in 15 states.

These new markets have helped put some real zip into results, with Q3 net earned premiums growing a robust 55% on a year-over-year basis to $146 million, and net income advancing 42% to just over $30 million. 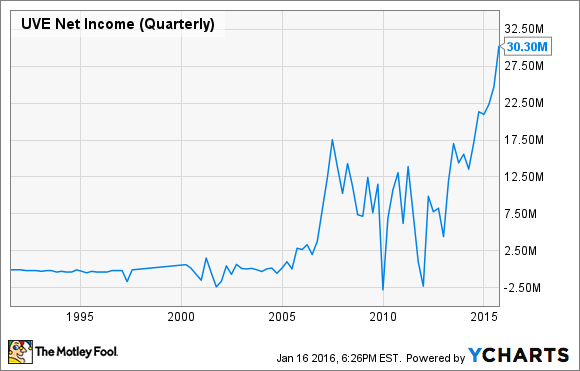 We can expect Universal Insurance Holdings to continue on this expansion path if it's producing those kinds of improvements. We can also, I feel, count on that payout rising again, as the company is strongly and consistently cash flow positive... and despite the 17% hike, the company still pays out relatively little of its free cash flow as dividends.

Universal Insurance Holdings' new distribution will be paid on March 2 to stockholders of record as of Feb. 18.

Eric Volkman has no position in any stocks mentioned. The Motley Fool recommends General Motors. Try any of our Foolish newsletter services free for 30 days. We Fools may not all hold the same opinions, but we all believe that considering a diverse range of insights makes us better investors. The Motley Fool has a disclosure policy.