The recent market correction has given us some fantastic bargains in banking.

The stock market has gotten hammered so far in 2016, and banking has been one of the worst-performing sectors. In times like these, it's important to realize one thing: You have an excellent opportunity to pick up fantastic companies at a huge discount. Here's why now is the time to consider Wells Fargo (WFC -1.21%) and US Bancorp (USB 0.57%) for your portfolio.

Two of the most profitable banks in the world
Wells Fargo and US Bancorp are consistently able to produce stronger profitability figures than their peers. In general, banks are considered to be sufficiently profitable if they produce a return on equity (ROE) of 10% and a return on assets (ROA) of 1%. In other words, if a bank has $100 billion in assets, it should be able to produce net income of at least $1 billion in a year.

For the full year of 2015, Wells Fargo produced ROE and ROA well above this amount, and US Bancorp did even better. This isn't unique to 2015; as you can see in the charts below, these two banks (the blue and orange lines) are consistently the most profitable of the big U.S. banks. 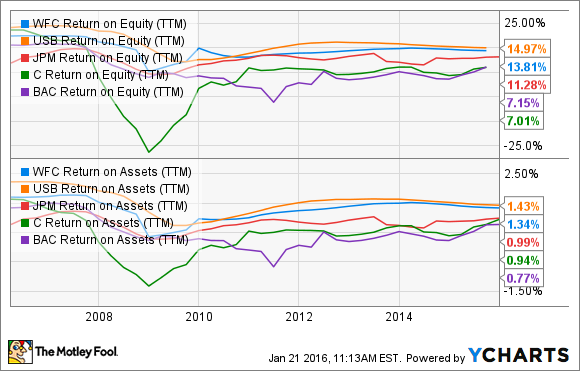 There are a few reasons for this, and much of the strong performance can be attributed to superior asset quality and efficiently run operations. This can be seen in the banks' overall efficiency ratios of 53.8% (USB) and 57.8% (Wells Fargo), which tells us how much money these banks spent to generate their revenue, so lower is better. In contrast, JPMorgan Chase operated at a 61% efficiency ratio in 2015, and Citigroup reported efficiency of 57%, but this excluded its Citi Holdings legacy asset division. Bank of America's consumer banking division is quite efficient (56%), but other parts of the bank are not, such as the global wealth and investment management business at 78%.

Impressive growth in a challenging environment
As any bank CEO can tell you, now is a difficult time to grow revenue and earnings, especially with interest rates so low. However, both Wells Fargo and US Bancorp are growing in ways that will set them up for the future.

One big driver of growth for both banks is credit cards. During the fourth quarter, Wells Fargo's credit card purchase volume grew 12% year over year, and 43.4% of its retail banking households now have a credit card relationship with the bank, up from 41.5% a year ago. US Bancorp grew its overall credit and debit card revenue by 8.1% over last year, and is excited about its new partnership with Fidelity to be the exclusive issuer of two Fidelity-branded credit card products.

There are other promising areas of growth as well. Wells Fargo managed to grow its wealth and investment management assets despite dismal market performance. The bank also grew its checking account customer base by 5.6% -- impressive for an institution of its size.

US Bancorp produced its highest net income ever in 2015, and produced 4.2% yearly growth in its loan portfolio, including impressive 9% growth in commercial loans and 13% in auto lending. Plus, its low-cost deposit base grew by 11.4%.

The best sale in years
I've talked about why Wells Fargo and US Bancorp are great companies, so now let's take a look at why I'm so insistent that now is a great time to buy.

A great way to track a bank's valuation over time is its share price relative to the value of its tangible assets. This lets you know how cheap or expensive a bank is compared to how cheap or expensive it used to be. Wells and US Bancorp have historically traded for a significant premium to their peers for the reasons I've already mentioned, and they continue to do so.

However, Wells Fargo is trading at a valuation level not seen in nearly three years, despite the continuing improvement in its business and the overall banking industry. And, US Bancorp is trading for a valuation not seen since 2011, when the financial crisis was still fresh in investors' minds. 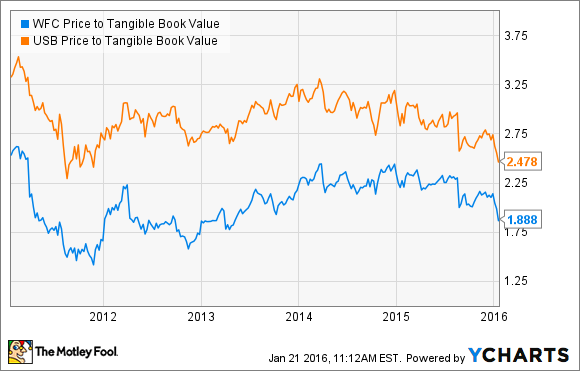 In short, these are two of the best-run banks in the world, and have been for some time. They are well-positioned to weather any market storm that comes, and are also set up for big profits as interest rates rise and the economy continues to improve. Both banks are selling at a tremendous discount, so now may be a great time to dive in.