Investing in small-cap stocks isn't for every investor. It's risky, as these companies are often unproven and typically have a very volatile stock price. However, small caps also give individual investors a chance to beat institutional investors, because often times, large mutual funds have restrictions that limit their ability to buy a sizable portion of the small-cap companies.

If investors are looking for high-risk and high-reward small caps, here are two intriguing small caps that have made it onto my watchlist. 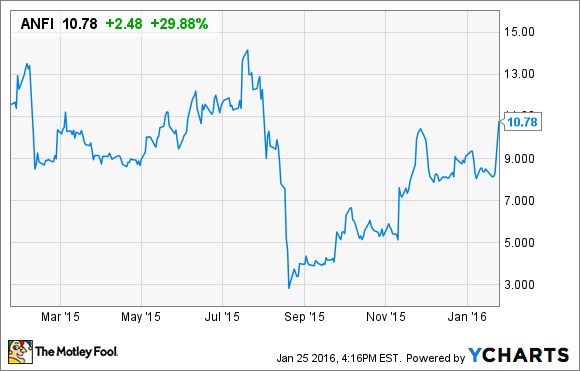 First up: Amira Nature Foods Ltd. (NYSE: ANFI)
This week brought great news for Amira Nature Foods and its investors. The company announced it completed the filing of its Form 20-F with the Securities and Exchange Commission for the fiscal year ended March 31, 2015. That also brought the completion of ASA & Associates' audit of Amira's past three fiscal years, and it confirmed that there were no material changes to the financial results. That essentially brings an end to a three-year period of audits, litigation, and other business challenges that had weighed on the company and its investors.

With that said, now the company can fully focus on growth -- something it has done well since its IPO. 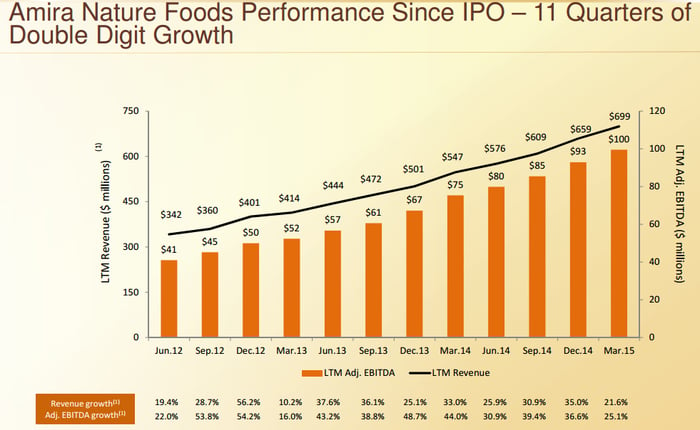 During its fiscal 2015, the company generated about 41% of its revenues in India, while its international sales took the larger slice of the pie. However, demand for rice in India alone is expected to rise at about 7% CAGR per year until 2025 -- when it's projected to reach roughly $1.5 trillion in value. As the company continues to build out its distribution network, it should be well positioned to take its fair share of India's growing rice market.

Looking beyond India, the specialty rice provider is selling in 25 different countries under its name brand, and in 40 countries through third-party vendors. If all goes according to plan, Amira plans to be in nearly 70 countries by the end of 2017, and that includes a growing presence in high-growth markets like the U.S. and the U.K. The company's potential growth in the U.S. is especially enticing, and Amira is already working with major retailer CostCo and recently announced that its Amira-branded products are available in Price Chopper stores.

If Amira can continue to build out its global distribution network and expand its lineup of rice products, it could be a big winner down the line.

Next up: Kandi Technologies Corporation (KNDI 5.43%)
The future of the automotive industry may very well be the electric vehicle, and companies like Tesla Motors are all-in on their electric vehicle strategies. One market where electric vehicle adaption might accelerate at a faster rate is in the world's largest automotive market: China. That's because fixing China's pollution levels has become a huge priority for the government, and one of the solutions is to incentivize sales of electric vehicles in the country.

In fact, electric vehicles sold very well last year in China, increasing threefold to more than 331,000 units. While the threefold jump is an impressive statistic in terms of percentage gains, it puts in perspective how much potential growth the electric vehicle market has in a country where its total vehicle sales in 2015 topped 24 million.

A couple of weeks ago, Kandi announced it had exceeded its sales forecast by 5% or more during 2015, and that its Model K17 (Kandi Cyclone) was given an award for China's 2015 Pure Electric Vehicle of the Year, during the Global New Energy Vehicle Conference. Also, another interesting development for Kandi investors was that its Micro Public Transportation program, which provides a shared electric vehicle transportation for urban consumers, expanded quicker than expected -- to 16 cities by the end of last year.

While the overall automotive market in China appears to be propped up with a tax incentive that cuts purchase taxes in half through the remainder of 2016, the electric vehicle game is still in early innings -- which could make Kandi a big long-term winner. That said, the near term promises to be a very bumpy ride for investors while China's automotive market, as well as its overall economy, remains volatile.