Please ensure Javascript is enabled for purposes of website accessibility
Log In Help Join The Motley Fool
Free Article Join Over 1 Million Premium Members And Get More In-Depth Stock Guidance and Research
By Matthew DiLallo - Jan 26, 2016 at 10:33AM

A tough start could get even tougher.

Like most stocks, EOG Resources (EOG 1.31%) is off to a rough start in 2016. While the stock is already down double digits in just the first three weeks, it could have even further to fall. Here are three catalysts that could send EOG Resources' stock even lower.

Oil keeps falling
The primary culprit behind EOG Resources' sell off to start the year is the price of crude, which is likewise down double digits: 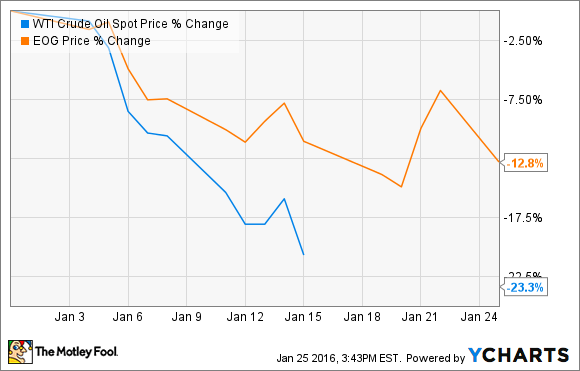 Crude continues to fall further than most analysts and oil executives ever expected and could keep falling until it forces the oil industry to not only shut down rigs, but start shutting off higher cost production. Such a decline would take EOG Resources' stock with it because the company's primary income source is its sale of crude.

Its credit rating is downgraded
With crude continuing to fall, it is causing concern that the balance sheets of larger oil companies could begin to deteriorate. That's why credit rating agency Moody's recently put 29 oil companies on review for a potential rating downgrade, including EOG Resources. Currently, the company's senior unsecured bonds are rated A3, so a downgrade would push the company into "B" territory.

Such a downgrade wouldn't be the end of the world for EOG Resources, because it doesn't rely on debt to fund acquisitions or drilling. That's why it has one of the lowest leverage ratios in its peer group: 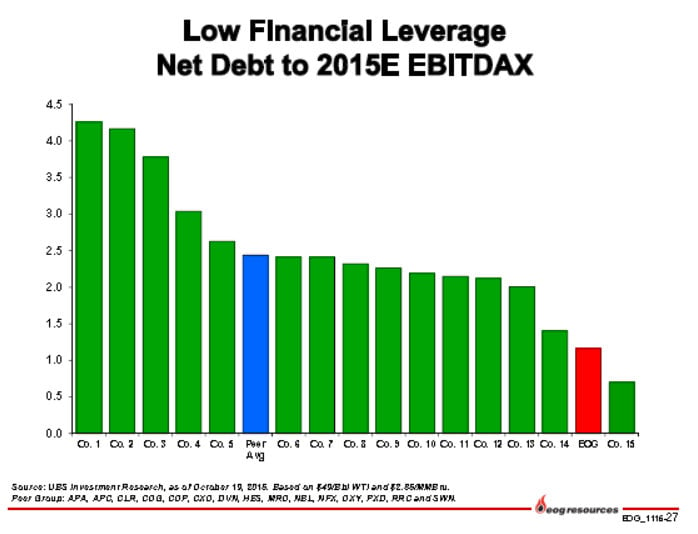 That said, a downgrade would be a signal to investors that even the best balance sheets are a concern, which could could cause the stock selling off.

Analysts throw in the towel
Most analysts are generally positive on EOG Resources due in part to its stronger balance sheet and ability to grow quickly when conditions improve. That's one reason why an analyst from Citi upgraded EOG Resources, Anadarko Petroleum (APC), and two others from neutral to buy earlier this year. In that upgrade the analyst thought that these companies were in the best position to benefit from the eventual upturn in oil prices. In EOG Resources' case, that's largely due to its huge portfolio of drilled, but uncompleted wells that it could quickly bring online when conditions improve. Meanwhile, Anadarko can turn back its focus to short-cycle growth by investing incremental cash flow from higher oil prices into its shale plays.

That being said, some analysts are getting more bearish on the sector as a whole because they are tired of being wrong. Oppenheimer, for example, now sees half of U.S. shale producers going bankrupt. Further, its analysts see 13 of the 15 large E&P companies they cover reporting losses for the fourth-quarter, including both EOG Resources and Anadarko Petroleum. With oil prices continuing to fall, more analysts are beginning to ratchet down their estimates. This could lead some of EOG Resources' supporters to throw in the towel and downgrade the stock. A downgrade that was, for example, from buy all the way to sell would likely weigh heavily on the stock, especially if made on a day when oil is also falling.

Investor takeaway
With the price of oil falling into a bottomless pit it could lead to even more downside for EOG Resources' stock. Especially if it causes analysts, both credit and equity, to throw in the towel and downgrade the company.

For some investors this is actually an appealing possible outcome because it could offer them a chance to buy EOG Resources' stock at an even cheaper price. However, for others it's a warning to not over allocate because the stock could keep falling in spite of its relative strength compared to its peers.

Matt DiLallo has no position in any stocks mentioned. The Motley Fool owns shares of EOG Resources,. Try any of our Foolish newsletter services free for 30 days. We Fools may not all hold the same opinions, but we all believe that considering a diverse range of insights makes us better investors. The Motley Fool has a disclosure policy.