Approaching seven months since their split, longtime partners eBay (EBAY 1.97%) and PayPal (PYPL 0.96%) have seen mixed results from the market. 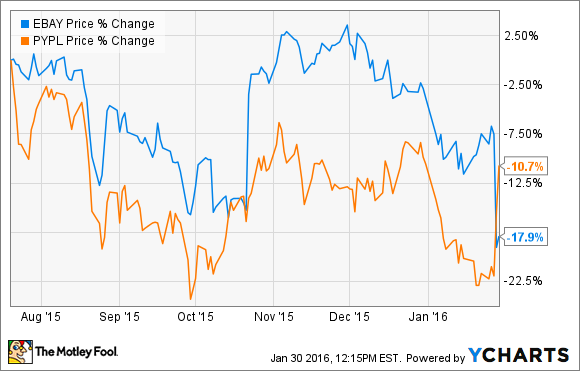 However, tech investors got the clearest signals yet regarding the wisdom of this high-profile corporate breakup, when eBay and PayPal reported earnings last week. If their separate performances are any indication, eBay is floundering while PayPal's payments platform continues to prosper.

However, eBay's first-quarter and full-year 2016 guidance were uninspiring. For the year ahead, eBay said it expects both sales and profits to remain effectively unchanged from 2015, reflecting a broader problem facing the platform. As Needham & Co. analyst Kerry Rice put it: "eBay needs to do a better job of getting customers to think of shopping there. ... The picture people have is used and collectible items." Said another way, eBay faces an image problem.

Though a majority of the items the site sells are at a fixed price, the company has struggled to shed its reputation as an auction site. And though the company's margins remain compelling, eBay's trading multiples will probably remain mired in the mid-teens, as they do now, until the company can find some way of reigniting the company's growth. The same cannot be said of PayPal.

PayPal outperforms
Unlike its former parent company, PayPal reported an impressive earnings beat, demonstrating momentum in nearly every aspect of its business. Here's how its top- and bottom-line results compared with the average analyst estimates.

PayPal's revenue grew 17% compared with the same quarter the previous year, including one percentage point that came from its acquisition of money-transfer start-up Xoom last July. The strength of the U.S. dollar also shaved roughly four percentage points of growth from the company's top line, slightly dampening an otherwise stellar performance.

Perhaps more impressively, PayPal also added 6.6 million active accounts, good for a 4% bump, reaching a year-end total of 179 million active users. The company also made progress in growing per-customer payment volumes. For the quarter, PayPal increased the number of average monthly transactions each customer processed on the service from 25 the previous year to 27 in the fourth quarter.

So while both companies both enjoy compelling aspects of their businesses, the recent post-split earnings report shows that PayPal's prospects appear far more compelling than eBay's.

Andrew Tonner owns shares of eBay. The Motley Fool owns shares of and recommends eBay and PayPal Holdings. Try any of our Foolish newsletter services free for 30 days. We Fools may not all hold the same opinions, but we all believe that considering a diverse range of insights makes us better investors. The Motley Fool has a disclosure policy.