A powerful group of executives and investors including Warren Buffett and JPMorgan's Jamie Dimon want to improve corporate governance on behalf of long-term investors. 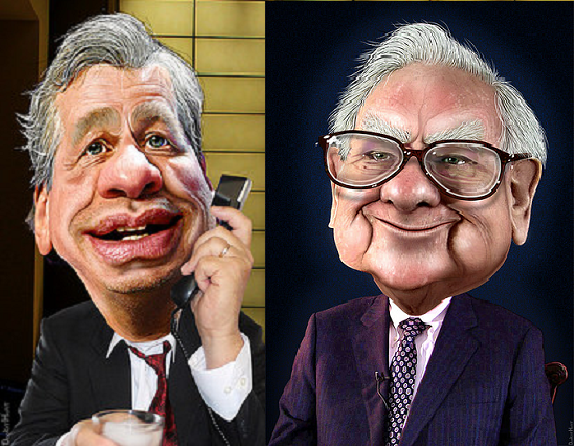 Created by the author, based on caricatures from DonkeyHotey. Republished under CC BY 2.0.

Warren Buffett walks into a secret meeting with the CEOs of America's largest bank and the world's largest investment group. The meeting is good for individual investors.

That isn't a conspiracy theorist's idea of dark humor; in fact, the meeting occurred only last month at the New York headquarters of JPMorgan Chase, according to the Financial Times.

The December meeting is just the latest in a series of summits that aim to promote longer-term thinking in executive offices and boardrooms. The group will ultimately produce a statement of best practice regarding the relationship between public companies and their shareholders.

The news of this initiative coincides with Larry Fink's 2016 "Corporate Governance Letter," dated yesterday and sent to company CEOs. BlackRock, in addition to being the world's largest asset manager, manages the popular range of iShares ETFs, making the group one of the top investors in every company in the S&P 500:

We are asking that every CEO lay out for shareholders each year a strategic framework for long-term value creation. Additionally, because boards have a critical role to play in strategic planning, we believe CEOs should explicitly affirm that their boards have reviewed those plans.

Such an exercise would be a proactive means of foiling those activist investors who aren't acting in the best interests of the companies they target and their long-term shareholders.

Without clearly articulated plans, companies risk losing the faith of long-term investors. Companies expose themselves to the pressures of investors focused on near-term profit at the expense of long-term value. Indeed, some short-term investors (and analysts) offer more compelling visions for companies than the companies themselves, allowing these perspectives to fill the void and build support for potentially destabilizing actions.

Fink is also concerned that some of the actions promoted by these short-term investors -- share buybacks, specifically -- are being carried out at the expense of long-term investment in the company's operations.

Larry Fink has been writing similar letters to chief executives and board members at least as far back as 2012. Of course, Warren Buffett has written extensively on these topics for decades in his annual letters to Berkshire Hathaway shareholders, and while the letters now generate significant interest, many (perhaps even most) of his recommendations remain ignored in corporate America.

(Nonetheless, he has had a material influence on some high-profile business leaders at companies beyond Berkshire's immediate sphere, including Bill Gates and Alphabet's Larry Page and Sergey Brin.)

I can only praise this latest initiative and will be very interested to see the end product. Collectively, the participants have enormous clout in the capital markets, so it represents a tremendous opportunity to improve corporate governance on behalf of long-term investors.

Suzanne Frey, an executive at Alphabet, is a member of The Motley Fool's board of directors. Alex Dumortier, CFA, has no position in any stocks mentioned. The Motley Fool owns shares of and recommends Alphabet (A and C shares) and Berkshire Hathaway. Try any of our Foolish newsletter services free for 30 days.