What: Shares of CVR Refining (NYSE:CVRR) slid 14.8% in the month of January as refining margin indicators for the month continue to decline after 2015's strong margins.

So what: CVR Refining's business is the energy world's middle man, its profits are generated entirely from the price spread between a barrel of crude oil and the price of that same barrels worth of refined petroleum products. Some companies can milk these results by changing up the mix of products they supply and by buying crudes that sell at less than market prices, but ultimately the broader market will have a big say in the company's results. 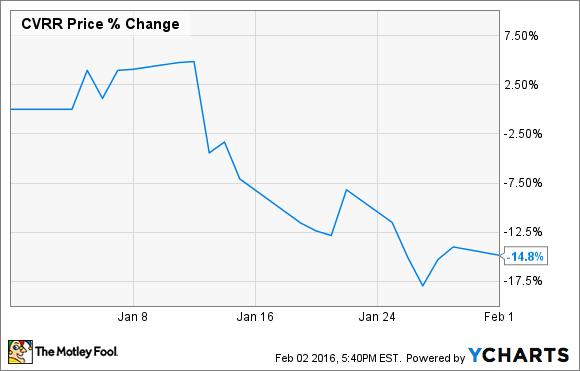 So far this year, it's looking like the market for refining won't be as robust as it has been in the previous couple quarters. According to Scotia Howard Weil's weekly refining market report, the crack spread for Midwest refiners has declined from its high of $22.23 in the third quarter to $11.01 for the first three weeks of 2016. Even on a year over year basis, this quarter's crack spreads are 40% lower.

What this likely means is that CVR Refining will be posting some lower earnings results in the coming quarters, and for a variable rate master limited partnership like CVR Refining, that also means that the distribution paid out to investors will likely be much less than what they had received in the first quarter of 2015.

Now What: Investors looking for a stable income check are probably not that interested in CVR Refining, its results on a quarterly basis are highly variable and don't lend themselves well to someone looking to live off dividend checks. 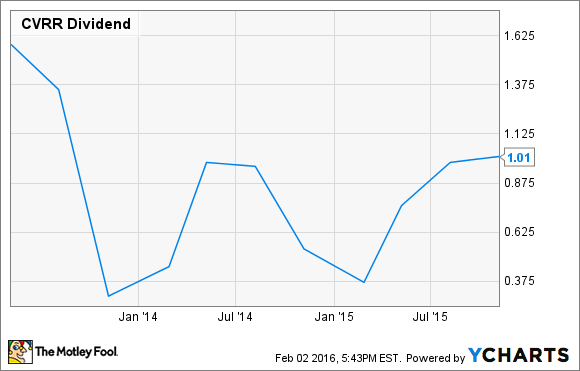 For those looking for a company on a longer term basis, though, CVR Refining seems to be pulling the right levers. The company has been increasing utilization rates at both of its refineries, it has been lowering its operating costs, and has been paying down debt for close to four years in a row to the point that it's almost net debt free. Despite what will likely be a lower earnings result this coming quarter and next, shares of CVR Refining do look tempting even if that 19% distribution yield is likely to come down.