Thanks to a rough year, beating estimates was all it took for shares of Colfax Corporation to pop today -- despite profits declining.

So what: Colfax's fourth quarter wasn't eye-popping, at least in terms of the stock moving higher, but the company did manage to beat Wall Street estimates and that's about the only positive news for the stock price over the past year. 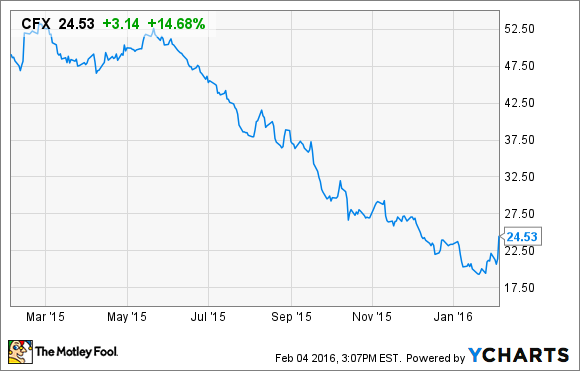 Colfax's adjusted operating profit also fell from $136.7 million down to $100.6 million, for the same time frame. Also, as investors would expect, the company's adjusted earnings per share took a hit, declining to $0.51 per share during the fourth quarter, compared to the prior year, but that was $0.08 better than estimates from Capital IQ.

Now what: What investors will want to watch going forward is whether Colfax can continue to reduce its costs. Management noted that Colfax was on track to deliver $100 million in cost reductions from its 2014 cost base by the end of this year. Colfax also reduced its debt by $131 million during the fourth quarter. Also, investors should expect further volatility as the company does have some exposure to China.