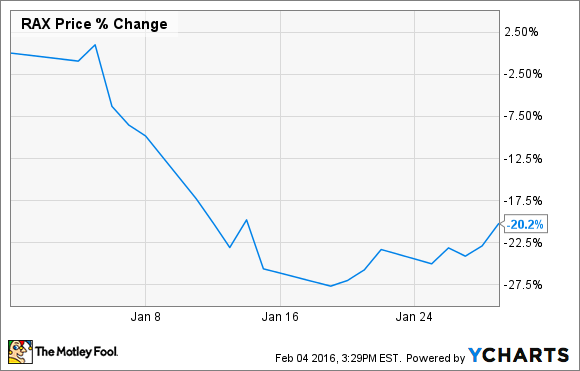 What: Shares of cloud infrastructure provider Rackspace Hosting (NYSE:RAX) fell by 20% in January, according to Capital IQ data, due to increased competition and negative investor sentiment.

So what: Rackspace lost nearly half of its value throughout 2015, thanks to increased competitive pressures from larger players Amazon.com (NASDAQ:AMZN) and Microsoft (NASDAQ:MSFT). The two heavyweights have been aggressively cutting prices related to commodity services -- including many that Rackspace also offers -- while hoping to upsell enterprise customers on higher-margin services. A survey of CIOs showed that Amazon and Microsoft are expected to continue gaining market share.

Now what: Microsoft and Amazon both cut prices in January for various cloud-infrastructure services, intensifying the pressure on Rackspace. Since cloud infrastructure vendors benefit substantially from scale, Microsoft and Amazon have considerable advantages over Rackspace, which may struggle to keep up. Rackspace has maintained that it can differentiate itself from the larger players based on high service levels, but investors have legitimate concerns about the viability of that strategy when the larger players show no signs of letting up.