Please ensure Javascript is enabled for purposes of website accessibility
Log In Help Join The Motley Fool
Free Article Join Over 1 Million Premium Members And Get More In-Depth Stock Guidance and Research
By Daniel B. Kline - Feb 6, 2016 at 6:40AM

It really comes down to only two, and the winner may surprise you.

With data use becoming heavier as people increasingly use their smartphones for video, GPS, and other high-data uses, the idea of signing up for unlimited data should appeal to more consumers.

With an unlimited plan, a subscriber would no longer have to worry about overages or data slowdowns once an allotted amount of data has been consumed. It's a freedom from worrying, but one that comes with a price, if you can buy it at all.

Of the four major wireless carriers, only Sprint (S) and T-Mobile (TMUS -0.45%) regularly offer unlimited data plans. Verizon (VZ -0.32%) and AT&T (T 0.17%) offer them to grandfathered users (though they make every effort to encourage people to drop them) and AT&T has reintroduced them on a limited basis if people also subscribe to DirecTV. So, because there's no way for new subscribers to get a Verizon unlimited plan and having to add a satellite TV subscription is a pretty odious condition for AT&T customers, deciding on a best plan really comes down to T-Mobile vs. Sprint.

What is each carrier offering?
T-Mobile would argue that all its plans are unlimited because it has no data caps. Instead, its regular plans include a paid-for allotment of high-speed data. After that has been used, the subscriber does not get turned off or charged overages, he or she simply gets his or her service slowed down. But the company does also offer traditional unlimited 4G LTE plans where users can consume as much high-speed data as they want.

Under T-Mobile's straightforward pricing, this makes the cost of unlimited service $95 per month before adding in the cost of the phone. That's $50 for the line (which would have come with 2GB of high-speed data) plus $45 for the unlimited service. Customers would also have to either bring a phone with them, buy one for its retail price, or finance the phone over two years. 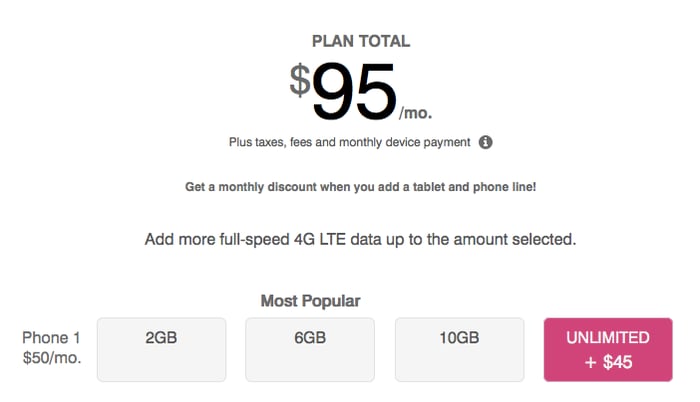 Like its rival, Sprint has recently started offering no-overage plans that match the T-Mobile policy of including a certain data allotment then slowing down service, but not charging overages. Unlike T-Mobile, it doesn't make finding plan pricing on its website all that easy because it ties plan prices into what device you pick. It's a bit confusing, and it's unclear whether bringing your own phone is even an option.

After selecting the latest iPhone, Sprint finally shows prices, and it comes in at $70 a month for unlimited data  (plus $26.39 a month for the phone). That's cheaper than T-Mobile, which is $95 a month before the consumer selects a phone, but that's a plan including a leased iPhone where the customer never pays it off.

Buying the handset on a 24-month financing plan costs a little more each month -- $27.09, with the same $70 a month for unlimited data -- but at the end the consumer owns the phone. The downside is that on the lease plan he or she can upgrade after 12 months while the financing deal must be paid off in full before an upgrade can occur.

The bottom line
Sprint has a better deal, but it doesn't make it easy to find. It's silly that the company hasn't made an effort to offer transparent pricing -- which T-Mobile certainly has -- especially when in the specific scenario of which company offers the lowest-priced, truly unlimited plan, Sprint wins.

This is a coup for Sprint, which is desperately trying to win market share from not only T-Mobile, but also from AT&T and Verizon. The negative here is that the company can't just come out and list its pricing.  The unlimited option isn't exactly hidden, but it's much less promoted than other promotions the company offers, which suggests it would rather people stick to conventional data plans.

Even when it wins, Sprint still hasn't quite gotten it right when it comes to dealing with customers, but that may not matter to people seeking unlimited 4G LTE data at the cheapest price.