What: Investors in human-enzyme specialist Halozyme Therapeutics (NASDAQ:HALO) had a month to forget, as its shares lost 51% of their value in January, according to data from S&P Capital IQ. 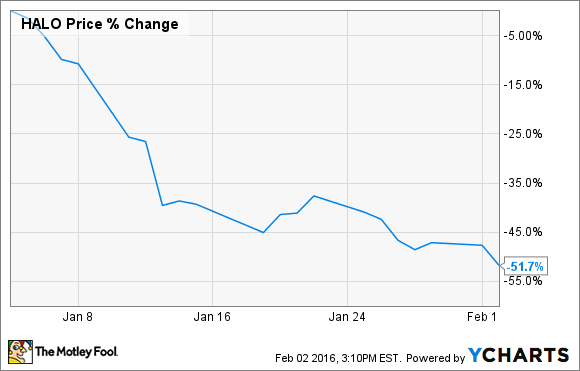 So what: With a drop like that, you'd expect that the company had a clinical trial go horribly wrong; but the month actually contained a number of positive releases:

Now what: While shares drifted lower all month long, they really took a tumble after the company provided its financial guidance for 2016, which suggests that the market was taken aback by the company's huge spending plans for the year ahead. For perspective, at its meeting last year, the company stated that it planned on spending roughly $150 million during the year, so you can see that this year's spending plan will add roughly $100 million to that number.

Only time will tell if the company's huge ramp in spending will pay off in the long run, but given that Halozyme has already made believers out of many of the giants in the space -- AbbVie, Roche, Baxalta, and many more have already signed on as partners -- I'm inclined to give them the benefit of the doubt for now.