Please ensure Javascript is enabled for purposes of website accessibility
Log In Help Join The Motley Fool
Free Article Join Over 1 Million Premium Members And Get More In-Depth Stock Guidance and Research
By Daniel B. Kline - Feb 8, 2016 at 11:39AM

The No. 1 U.S. cable company had a strong year even after losing out on the big prize when the FCC scuttled its attempt to buy Time Warner Cable.

Comcast (CMCSA 1.18%) closed out its 2015 with a relatively solid fourth quarter that capped an encouraging year, even though the company failed to complete a merger with Time Warner Cable (NYSE: TWC).

The company posted $19.25 billion in revenue, up from $17.73 billion in the Q4 2014, an 8.5% increase, according to its fourth-quarter earnings release. Earnings per share came in at $0.79, or $0.81 when adjusted for non-recurring costs. The average estimate of 19 analysts surveyed by Zacks Investment Research was for earnings of $0.82 per share, the Associated Press reported.

Overall, Comcast had a strong year, with encouraging results in its cable division, where it added 89,000 subscribers in the quarter -- its best fourth-quarter performance in eight years. The company only lost 36,000 video customers in 2015, its best result since 2007, and an impressive number given the momentum of the cord cutting trend. Annual revenue for the cable division, which includes broadband and other services, increased 6.2% to $46.9 billion, compared to $44.1 billion in 2014, largely due to growth in Internet service customers.

The company was solid across the board in Q4 and for the full year, with its theme park division performing especially well: It delivered a fourth quarter increase of 38.6% to $1 billion. For the full year, revenue from the segment increased 27.3% to $3.3 billion compared to $2.6 billion in 2014. These numbers were driven by Orlando's Wizarding World of Harry Potter, Hollywood's Fast and Furious: Supercharged, as well as Halloween Horror Nights at both parks.

It was a big quarter to end a big year, and Comcast's executive team had a lot to say about it in the company's earnings conference call, which was transcribed by Reuters. 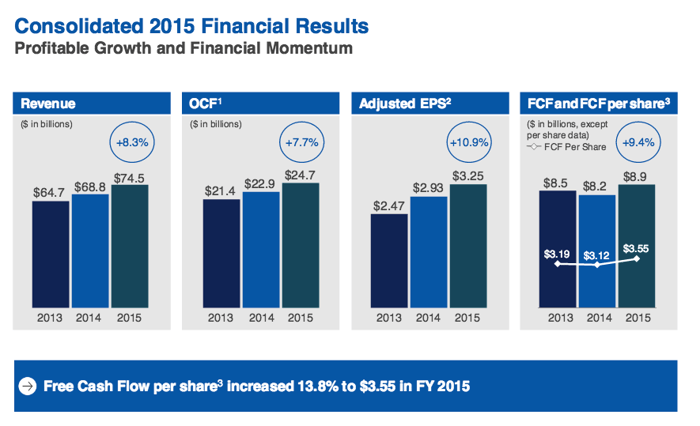 The company is happy with its customer service progress
Comcast has long been infamous for its poor customer service, and it's likely that its issues in that area contributed to the Federal Communications Commission's decision to deny its attempt to acquire Time Warner Cable.  It was partly due to the federal scrutiny of that deal that Comcast made improving how it interacts with its subscribers a priority for 2015. The company continued those efforts even after the deal was shot down and TWC moved into its now-pending merger with Charter Communications.

CEO Brian Roberts said during the call the he was happy with the company's efforts to transform its relationship with its customers. "In 2015, we made improving customer service our main focus. I'm really pleased that as we sit here today, we are seeing great progress," he said. "In fact, we achieved significant improvements across the key metrics we use to track customer satisfaction with some of our best customer metrics in years."

Better customer service may be paying off
While many companies would have struggled after abruptly being denied a deal as big as the TWC acquisition would have been, in this case, it does not appear to have caused any problems. It also seems likely that the more intensive customer focus had some positive impact on Comcast's ability to hold onto cable subscribers.

"This is our best quarterly result in eight years, driven primarily by another quarter of improved churn," said CFO Mike Cavanagh regarding the gain in video customers. "Our churn results reflect improved customer support, better market segmentation and customer recognition of what we believe is the best video product on the market."

Internet customers are key
While Comcast lost out on the chance to add Time Warner Cable's customers to its own, it did a good job adding to its user base.

"The strong momentum in our high-speed data business continued. Revenue increased 9.8% during the quarter, making it again the leading contributor to overall cable revenue growth, driven by an impressive increase in our customer base, as well as rate adjustments and an increasing number of customers taking higher-speed service," the CFO said.

Comcast added 460,000 data customers during Q4 and 1.4 million during the full year.

The film division has tough comps ahead
Cavanagh noted that film revenue increased by 25.8% in Q4 while home entertainment revenue increased 75% driven by the strong performances of Minions and Jurassic World. That was partially offset by a 37.5% decline in theatrical revenue and higher operating costs during the quarter. Last year was the most profitable ever for Comcast's Universal film company, with full-year operating cash flow increasing 74% to $1.2 billion.

That is very encouraging, and the sequel potential of its 2015 hits should drive strong years in the future, but the 2016 comps are going to be difficult.

"While our 2016 slate is not as large and will be a difficult comparison to 2015, we're excited about our strategic slate of core franchises, sequels and animated films," Cavanagh said.

Skinny bundles are key, but limited
One of the ways Comcast has been able to hold onto its video subscribers has been by offering limited cable packages -- skinny bundles -- in select markets, including some college campuses. Comcast Cable CEO Neil Smit spoke about the importance of those products while also downplaying their overall role.

"Concerning the skinny bundles, they are actually a very small percentage of our overall video customer base and we do feel we have room with the programmers and the penetration rates," he said. "In the fourth quarter, 75% of the year-over-year improvement in our video adds were at the higher-end packages. So I don't want to overstate the significance of skinny bundles."

Smit was encouraged by the company's Stream -- a skinny bundle delivered via streaming video, which has launched in Boston and Chicago.

"It's probably too early to say what it will turn into over time, but we feel good about the usage and good about the product," he said. "It's a good value proposition for the customer and we'll continue to roll it out to other markets."